Hedge Funds Have Never Been This Bullish On Glu Mobile Inc. (GLUU)

Before we spend days researching a stock idea we’d like to take a look at how hedge funds and billionaire investors recently traded that stock. S&P 500 Index ETF (SPY) lost 2.6% in the first two months of the second quarter. Ten out of 11 industry groups in the S&P 500 Index lost value in May. The average return of a randomly picked stock in the index was even worse (-3.6%). This means you (or a monkey throwing a dart) have less than an even chance of beating the market by randomly picking a stock. On the other hand, the top 20 most popular S&P 500 stocks among hedge funds not only generated positive returns but also outperformed the index by about 3 percentage points through May 30th. In this article, we will take a look at what hedge funds think about Glu Mobile Inc. (NASDAQ:GLUU).

Glu Mobile Inc. (NASDAQ:GLUU) has seen an increase in activity from the world’s largest hedge funds lately. GLUU was in 25 hedge funds’ portfolios at the end of the first quarter of 2019. There were 20 hedge funds in our database with GLUU holdings at the end of the previous quarter. Our calculations also showed that GLUU isn’t among the 30 most popular stocks among hedge funds.

In today’s marketplace there are several methods shareholders employ to analyze their holdings. Two of the less known methods are hedge fund and insider trading moves. Our experts have shown that, historically, those who follow the top picks of the elite hedge fund managers can beat the S&P 500 by a significant margin (see the details here).

How have hedgies been trading Glu Mobile Inc. (NASDAQ:GLUU)? 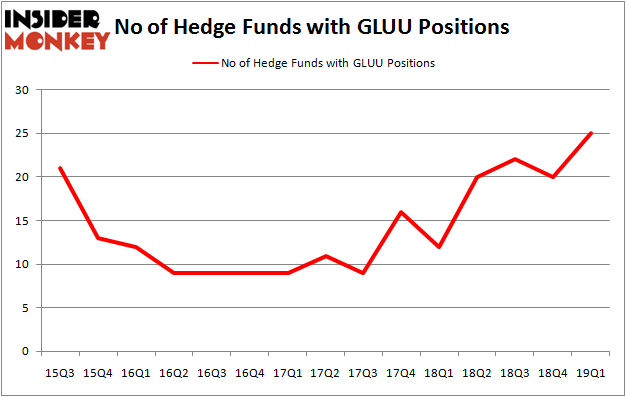 More specifically, Citadel Investment Group was the largest shareholder of Glu Mobile Inc. (NASDAQ:GLUU), with a stake worth $31 million reported as of the end of March. Trailing Citadel Investment Group was Columbus Circle Investors, which amassed a stake valued at $18 million. Renaissance Technologies, AQR Capital Management, and D E Shaw were also very fond of the stock, giving the stock large weights in their portfolios.

As you can see these stocks had an average of 18.25 hedge funds with bullish positions and the average amount invested in these stocks was $180 million. That figure was $131 million in GLUU’s case. Lattice Semiconductor Corporation (NASDAQ:LSCC) is the most popular stock in this table. On the other hand NBT Bancorp Inc. (NASDAQ:NBTB) is the least popular one with only 6 bullish hedge fund positions. Glu Mobile Inc. (NASDAQ:GLUU) is not the most popular stock in this group but hedge fund interest is still above average. This is a slightly positive signal but we’d rather spend our time researching stocks that hedge funds are piling on. Our calculations showed that top 20 most popular stocks among hedge funds returned 1.9% in Q2 through May 30th and outperformed the S&P 500 ETF (SPY) by more than 3 percentage points. Unfortunately GLUU wasn’t nearly as popular as these 20 stocks and hedge funds that were betting on GLUU were disappointed as the stock returned -25.5% during the same period and underperformed the market. If you are interested in investing in large cap stocks with huge upside potential, you should check out the top 20 most popular stocks among hedge funds as 13 of these stocks already outperformed the market so far in Q2.