The elite funds run by legendary investors such as David Tepper and Dan Loeb make hundreds of millions of dollars for themselves and their investors by spending enormous resources doing research on small cap stocks that big investment banks don’t follow. Because of their pay structures, they have strong incentives to do the research necessary to beat the market. That’s why we pay close attention to what they think in small cap stocks. In this article, we take a closer look at Gildan Activewear Inc (NYSE:GIL) from the perspective of those elite funds.

Is Gildan Activewear Inc (NYSE:GIL) worth your attention right now? The smart money is getting more optimistic. The number of bullish hedge fund positions increased by 2 in recent months. Our calculations also showed that GIL isn’t among the 30 most popular stocks among hedge funds.

How have hedgies been trading Gildan Activewear Inc (NYSE:GIL)?

Heading into the second quarter of 2019, a total of 27 of the hedge funds tracked by Insider Monkey were bullish on this stock, a change of 8% from one quarter earlier. Below, you can check out the change in hedge fund sentiment towards GIL over the last 15 quarters. With the smart money’s positions undergoing their usual ebb and flow, there exists an “upper tier” of key hedge fund managers who were boosting their stakes substantially (or already accumulated large positions). 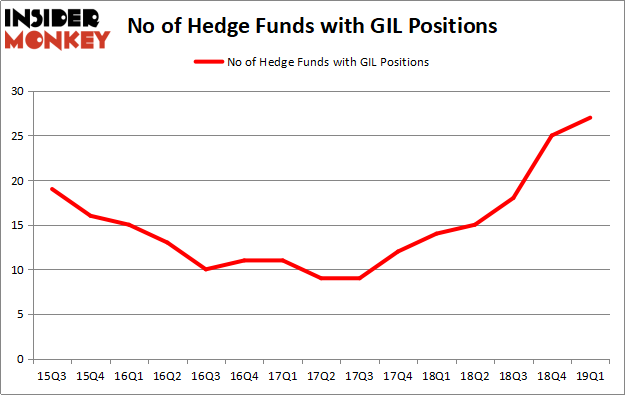 Among these funds, Pzena Investment Management held the most valuable stake in Gildan Activewear Inc (NYSE:GIL), which was worth $133.7 million at the end of the first quarter. On the second spot was Southpoint Capital Advisors which amassed $107.9 million worth of shares. Moreover, Nokota Management, Arrowstreet Capital, and MD Sass were also bullish on Gildan Activewear Inc (NYSE:GIL), allocating a large percentage of their portfolios to this stock.

With a general bullishness amongst the heavyweights, specific money managers were leading the bulls’ herd. Hudson Bay Capital Management, managed by Sander Gerber, created the largest position in Gildan Activewear Inc (NYSE:GIL). Hudson Bay Capital Management had $5.1 million invested in the company at the end of the quarter. Matthew Hulsizer’s PEAK6 Capital Management also made a $2 million investment in the stock during the quarter. The following funds were also among the new GIL investors: John Overdeck and David Siegel’s Two Sigma Advisors, Michael Platt and William Reeves’s BlueCrest Capital Mgmt., and Ronald Hua’s Qtron Investments.

As you can see these stocks had an average of 26.75 hedge funds with bullish positions and the average amount invested in these stocks was $772 million. That figure was $562 million in GIL’s case. Euronet Worldwide, Inc. (NASDAQ:EEFT) is the most popular stock in this table. On the other hand Store Capital Corporation (NYSE:STOR) is the least popular one with only 22 bullish hedge fund positions. Gildan Activewear Inc (NYSE:GIL) is not the most popular stock in this group but hedge fund interest is still above average. Our calculations showed that top 20 most popular stocks among hedge funds returned 1.9% in Q2 through May 30th and outperformed the S&P 500 ETF (SPY) by more than 3 percentage points. Hedge funds were also right about betting on GIL, though not to the same extent, as the stock returned 1.8% during the same time frame and outperformed the market as well.