Hedge Funds Have Never Been This Bullish On Genpact Limited (G)

As we already know from media reports and hedge fund investor letters, many hedge funds lost money in fourth quarter, blaming macroeconomic conditions and unpredictable events that hit several sectors, with technology among them. Nevertheless, most investors decided to stick to their bullish theses and recouped their losses by the end of the first quarter. We get to see hedge funds’ thoughts towards the market and individual stocks by aggregating their quarterly portfolio movements and reading their investor letters. In this article, we will particularly take a look at what hedge funds think about Genpact Limited (NYSE:G).

Genpact Limited (NYSE:G) was in 29 hedge funds’ portfolios at the end of March. G investors should be aware of an increase in support from the world’s most elite money managers lately. There were 22 hedge funds in our database with G positions at the end of the previous quarter. Our calculations also showed that g isn’t among the 30 most popular stocks among hedge funds.

If you’d ask most shareholders, hedge funds are perceived as worthless, old investment tools of years past. While there are over 8000 funds in operation today, Our experts look at the leaders of this club, about 750 funds. These money managers control bulk of the smart money’s total capital, and by watching their matchless equity investments, Insider Monkey has figured out many investment strategies that have historically outstripped the S&P 500 index. Insider Monkey’s flagship hedge fund strategy defeated the S&P 500 index by around 5 percentage points a year since its inception in May 2014 through the end of May. We were able to generate large returns even by identifying short candidates. Our portfolio of short stocks lost 30.9% since February 2017 (through May 30th) even though the market was up nearly 24% during the same period. We just shared a list of 5 short targets in our latest quarterly update and they are already down an average of 11.9% in less than a couple of weeks whereas our long picks outperformed the market by 2 percentage points in this volatile 2 week period.

At Q1’s end, a total of 29 of the hedge funds tracked by Insider Monkey were long this stock, a change of 32% from the previous quarter. Below, you can check out the change in hedge fund sentiment towards G over the last 15 quarters. With the smart money’s sentiment swirling, there exists a few noteworthy hedge fund managers who were adding to their holdings significantly (or already accumulated large positions). 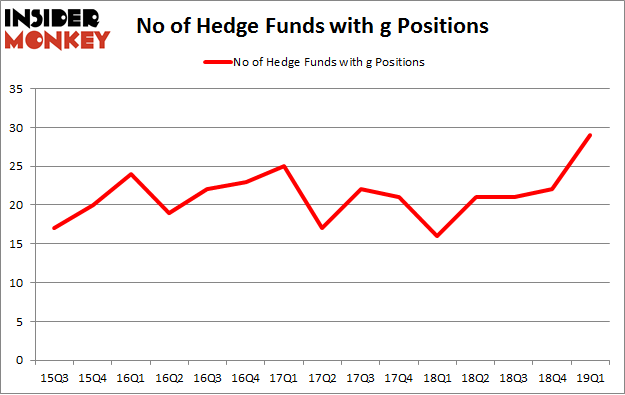 Among these funds, D E Shaw held the most valuable stake in Genpact Limited (NYSE:G), which was worth $120.4 million at the end of the first quarter. On the second spot was Arrowstreet Capital which amassed $111.5 million worth of shares. Moreover, Element Capital Management, Millennium Management, and Pzena Investment Management were also bullish on Genpact Limited (NYSE:G), allocating a large percentage of their portfolios to this stock.

With a general bullishness amongst the heavyweights, key money managers have jumped into Genpact Limited (NYSE:G) headfirst. Element Capital Management, managed by Jeffrey Talpins, created the most outsized position in Genpact Limited (NYSE:G). Element Capital Management had $52.9 million invested in the company at the end of the quarter. Vikas Lunia’s Lunia Capital also made a $10.2 million investment in the stock during the quarter. The other funds with new positions in the stock are Ian Simm’s Impax Asset Management, Dmitry Balyasny’s Balyasny Asset Management, and Ken Griffin’s Citadel Investment Group.

As you can see these stocks had an average of 19 hedge funds with bullish positions and the average amount invested in these stocks was $439 million. That figure was $601 million in G’s case. HubSpot Inc (NYSE:HUBS) is the most popular stock in this table. On the other hand Gerdau SA (NYSE:GGB) is the least popular one with only 10 bullish hedge fund positions. Genpact Limited (NYSE:G) is not the most popular stock in this group but hedge fund interest is still above average. Our calculations showed that top 20 most popular stocks among hedge funds returned 1.9% in Q2 through May 30th and outperformed the S&P 500 ETF (SPY) by more than 3 percentage points. Hedge funds were also right about betting on G as the stock returned 2.5% during the same period and outperformed the market by an even larger margin. Hedge funds were rewarded for their relative bullishness.