Hedge Funds Have Never Been This Bullish On Everbridge, Inc. (EVBG)

Is Everbridge, Inc. (NASDAQ:EVBG) a buy right now? Hedge funds are taking a bullish view. The number of bullish hedge fund positions inched up by 8 recently. Our calculations also showed that EVBG isn’t among the 30 most popular stocks among hedge funds. EVBG was in 30 hedge funds’ portfolios at the end of March. There were 22 hedge funds in our database with EVBG holdings at the end of the previous quarter.

At Q1’s end, a total of 30 of the hedge funds tracked by Insider Monkey were bullish on this stock, a change of 36% from the previous quarter. By comparison, 14 hedge funds held shares or bullish call options in EVBG a year ago. With hedge funds’ capital changing hands, there exists a few notable hedge fund managers who were adding to their stakes meaningfully (or already accumulated large positions). 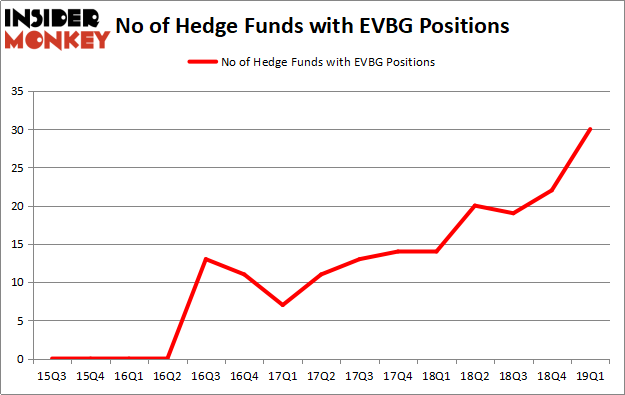 The largest stake in Everbridge, Inc. (NASDAQ:EVBG) was held by Alkeon Capital Management, which reported holding $68.1 million worth of stock at the end of March. It was followed by Light Street Capital with a $65.2 million position. Other investors bullish on the company included Polar Capital, Driehaus Capital, and Select Equity Group.

As industrywide interest jumped, key hedge funds were breaking ground themselves. Sylebra Capital Management, managed by Daniel Patrick Gibson, established the most valuable position in Everbridge, Inc. (NASDAQ:EVBG). Sylebra Capital Management had $17.5 million invested in the company at the end of the quarter. Jim Simons’s Renaissance Technologies also made a $9.3 million investment in the stock during the quarter. The other funds with new positions in the stock are Joe DiMenna’s ZWEIG DIMENNA PARTNERS, Ken Griffin’s Citadel Investment Group, and David Costen Haley’s HBK Investments.

As you can see these stocks had an average of 19.75 hedge funds with bullish positions and the average amount invested in these stocks was $247 million. That figure was $421 million in EVBG’s case. Liberty Expedia Holdings, Inc. (NASDAQ:LEXEA) is the most popular stock in this table. On the other hand SITE Centers Corp. (NYSE:SITC) is the least popular one with only 14 bullish hedge fund positions. Compared to these stocks Everbridge, Inc. (NASDAQ:EVBG) is more popular among hedge funds. Our calculations showed that top 20 most popular stocks among hedge funds returned 1.9% in Q2 through May 30th and outperformed the S&P 500 ETF (SPY) by more than 3 percentage points. Hedge funds were also right about betting on EVBG as the stock returned 7.2% during the same period and outperformed the market by an even larger margin. Hedge funds were clearly right about piling into this stock relative to other stocks with similar market capitalizations.