We can judge whether Epizyme Inc (NASDAQ:EPZM) is a good investment right now by following the lead of some of the best investors in the world and piggybacking their ideas. There’s no better way to get these firms’ immense resources and analytical capabilities working for us than to follow their lead into their best ideas. While not all of these picks will be winners, our research shows that these picks historically outperformed the market when we factor in known risk factors.

Is Epizyme Inc (NASDAQ:EPZM) a buy here? Money managers are getting more optimistic. The number of long hedge fund positions advanced by 1 lately. Our calculations also showed that epzm isn’t among the 30 most popular stocks among hedge funds. EPZM was in 19 hedge funds’ portfolios at the end of March. There were 18 hedge funds in our database with EPZM positions at the end of the previous quarter.

How have hedgies been trading Epizyme Inc (NASDAQ:EPZM)? 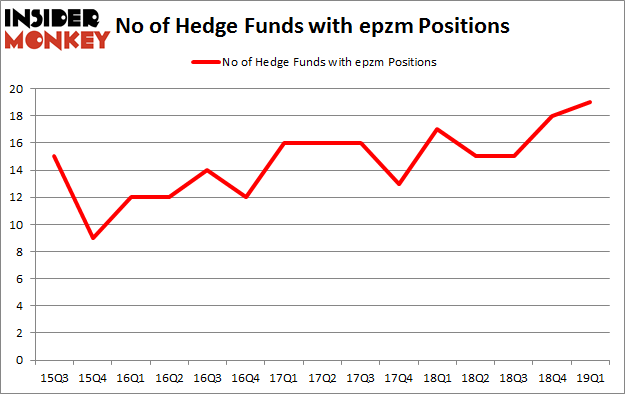 The largest stake in Epizyme Inc (NASDAQ:EPZM) was held by Redmile Group, which reported holding $95.3 million worth of stock at the end of March. It was followed by Palo Alto Investors with a $85.9 million position. Other investors bullish on the company included Consonance Capital Management, Great Point Partners, and Millennium Management.

As one would reasonably expect, key hedge funds were leading the bulls’ herd. Consonance Capital Management, managed by Mitchell Blutt, initiated the most valuable position in Epizyme Inc (NASDAQ:EPZM). Consonance Capital Management had $43.1 million invested in the company at the end of the quarter. Jeffrey Jay and David Kroin’s Great Point Partners also made a $26.9 million investment in the stock during the quarter. The other funds with new positions in the stock are Steve Cohen’s Point72 Asset Management, Ken Greenberg and David Kim’s Ghost Tree Capital, and D. E. Shaw’s D E Shaw.

Let’s go over hedge fund activity in other stocks – not necessarily in the same industry as Epizyme Inc (NASDAQ:EPZM) but similarly valued. We will take a look at KEMET Corporation (NYSE:KEM), Kiniksa Pharmaceuticals, Ltd. (NASDAQ:KNSA), InflaRx N.V. (NASDAQ:IFRX), and Third Point Reinsurance Ltd (NYSE:TPRE). This group of stocks’ market valuations are closest to EPZM’s market valuation.

As you can see these stocks had an average of 15.75 hedge funds with bullish positions and the average amount invested in these stocks was $188 million. That figure was $353 million in EPZM’s case. KEMET Corporation (NYSE:KEM) is the most popular stock in this table. On the other hand Kiniksa Pharmaceuticals, Ltd. (NASDAQ:KNSA) is the least popular one with only 10 bullish hedge fund positions. Epizyme Inc (NASDAQ:EPZM) is not the most popular stock in this group but hedge fund interest is still above average. Our calculations showed that top 20 most popular stocks among hedge funds returned 1.9% in Q2 through May 30th and outperformed the S&P 500 ETF (SPY) by more than 3 percentage points. Hedge funds were also right about betting on EPZM as the stock returned 12.4% during the same period and outperformed the market by an even larger margin. Hedge funds were rewarded for their relative bullishness.