Hedge Funds Have Never Been This Bullish On CrowdStrike Holdings, Inc. (CRWD)

Is CrowdStrike Holdings, Inc. (NASDAQ:CRWD) ready to rally soon? Money managers are in an optimistic mood. The number of bullish hedge fund positions rose by 19 recently. Our calculations also showed that CRWD isn’t among the 30 most popular stocks among hedge funds (click for Q4 rankings and see the video below for Q3 rankings). CRWD was in 48 hedge funds’ portfolios at the end of December. There were 29 hedge funds in our database with CRWD positions at the end of the previous quarter.

We leave no stone unturned when looking for the next great investment idea. For example Europe is set to become the world’s largest cannabis market, so we check out this European marijuana stock pitch. We read hedge fund investor letters and listen to stock pitches at hedge fund conferences, and and go through short-term trade recommendations like this one. We even check out the recommendations of services with hard to believe track records. In January, we recommended a long position in one of the most shorted stocks in the market, and that stock returned more than 50% despite the large losses in the market since our recommendation. With all of this in mind let’s take a gander at the latest hedge fund action encompassing CrowdStrike Holdings, Inc. (NASDAQ:CRWD). 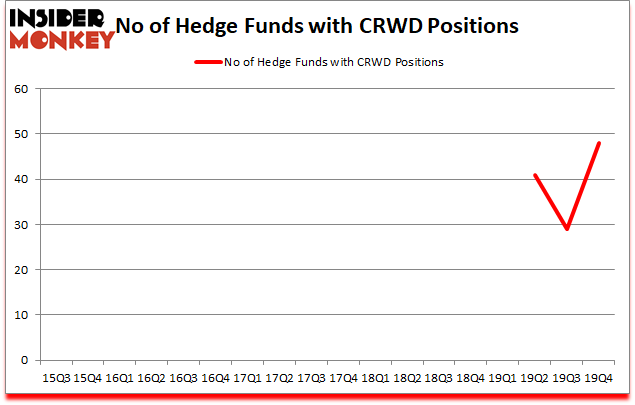 Among these funds, Point72 Asset Management held the most valuable stake in CrowdStrike Holdings, Inc. (NASDAQ:CRWD), which was worth $87.1 million at the end of the third quarter. On the second spot was Citadel Investment Group which amassed $64.7 million worth of shares. Whale Rock Capital Management, Balyasny Asset Management, and Alyeska Investment Group were also very fond of the stock, becoming one of the largest hedge fund holders of the company. In terms of the portfolio weights assigned to each position Element Capital Management allocated the biggest weight to CrowdStrike Holdings, Inc. (NASDAQ:CRWD), around 7.24% of its 13F portfolio. Light Street Capital is also relatively very bullish on the stock, designating 2.7 percent of its 13F equity portfolio to CRWD.

With a general bullishness amongst the heavyweights, some big names were leading the bulls’ herd. Balyasny Asset Management, managed by Dmitry Balyasny, initiated the most outsized position in CrowdStrike Holdings, Inc. (NASDAQ:CRWD). Balyasny Asset Management had $48 million invested in the company at the end of the quarter. Glen Kacher’s Light Street Capital also made a $45.1 million investment in the stock during the quarter. The other funds with new positions in the stock are Jeffrey Talpins’s Element Capital Management, David Fiszel’s Honeycomb Asset Management, and Paul Marshall and Ian Wace’s Marshall Wace LLP.

Let’s go over hedge fund activity in other stocks – not necessarily in the same industry as CrowdStrike Holdings, Inc. (NASDAQ:CRWD) but similarly valued. We will take a look at E*TRADE Financial Corporation (NASDAQ:ETFC), Reinsurance Group of America Inc (NYSE:RGA), Textron Inc. (NYSE:TXT), and FactSet Research Systems Inc. (NYSE:FDS). This group of stocks’ market caps are closest to CRWD’s market cap.

As you can see these stocks had an average of 32.25 hedge funds with bullish positions and the average amount invested in these stocks was $611 million. That figure was $613 million in CRWD’s case. E*TRADE Financial Corporation (NASDAQ:ETFC) is the most popular stock in this table. On the other hand FactSet Research Systems Inc. (NYSE:FDS) is the least popular one with only 24 bullish hedge fund positions. CrowdStrike Holdings, Inc. (NASDAQ:CRWD) is not the most popular stock in this group but hedge fund interest is still above average. Our calculations showed that top 20 most popular stocks among hedge funds returned 41.3% in 2019 and outperformed the S&P 500 ETF (SPY) by 10.1 percentage points. These stocks lost 12.9% in 2020 through March 9th but still beat the market by 1.9 percentage points. Hedge funds were also right about betting on CRWD as the stock returned -8.3% during the first quarter (through March 9th) and outperformed the market. Hedge funds were rewarded for their relative bullishness.

Is Twilio Inc. (TWLO) Going to Burn These Hedge Funds?
Monthly Newsletter Strategy
Download a free copy of our newsletter and see the details inside!
Hedge Fund Resource Center
Related News
CrowdStrike Holdings, Inc. (CRWD): Hedge Funds Had A Sudden Change of Heart Hedge Funds Have Never Been This Bullish On CrowdStrike Holdings, Inc. (CRWD) 15 Countries with the Highest Cancer Rates in the World in 2020 11 New Trending Business Ideas for Beginners (Updated) 15 Countries with the Best Roads in the World in 2020 (Updated)
Billionaire Hedge Funds