It was a rough fourth quarter for many hedge funds, which were naturally unable to overcome the big dip in the broad market, as the S&P 500 fell by about 4.8% during 2018 and average hedge fund losing about 1%. The Russell 2000, composed of smaller companies, performed even worse, trailing the S&P by more than 6 percentage points, as investors fled less-known quantities for safe havens. Luckily hedge funds were shifting their holdings into large-cap stocks. The 20 most popular hedge fund stocks actually generated an average return of 18.7% so far in 2019 and outperformed the S&P 500 ETF by 6.6 percentage points. We are done processing the latest 13f filings and in this article we will study how hedge fund sentiment towards CorVel Corporation (NASDAQ:CRVL) changed during the first quarter.

Is CorVel Corporation (NASDAQ:CRVL) a first-rate investment right now? Prominent investors are getting more bullish. The number of long hedge fund bets inched up by 1 in recent months. Our calculations also showed that CRVL isn’t among the 30 most popular stocks among hedge funds.

In the eyes of most stock holders, hedge funds are assumed to be underperforming, outdated financial tools of the past. While there are more than 8000 funds in operation today, We look at the moguls of this group, around 750 funds. It is estimated that this group of investors oversee the lion’s share of all hedge funds’ total asset base, and by tracking their best stock picks, Insider Monkey has revealed numerous investment strategies that have historically defeated Mr. Market. Insider Monkey’s flagship hedge fund strategy outperformed the S&P 500 index by around 5 percentage points per annum since its inception in May 2014 through June 18th. We were able to generate large returns even by identifying short candidates. Our portfolio of short stocks lost 28.2% since February 2017 (through June 18th) even though the market was up nearly 30% during the same period. We just shared a list of 5 short targets in our latest quarterly update and they are already down an average of 8.2% in a month whereas our long picks outperformed the market by 2.5 percentage points in this volatile 5 week period (our long picks also beat the market by 15 percentage points so far this year). 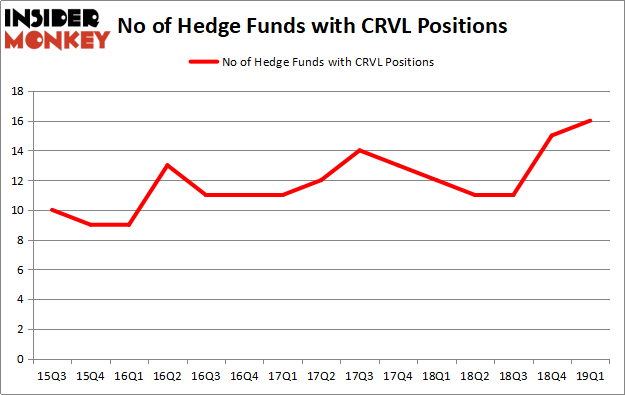 More specifically, Renaissance Technologies was the largest shareholder of CorVel Corporation (NASDAQ:CRVL), with a stake worth $91.6 million reported as of the end of March. Trailing Renaissance Technologies was Ancora Advisors, which amassed a stake valued at $10 million. AQR Capital Management, GLG Partners, and Millennium Management were also very fond of the stock, giving the stock large weights in their portfolios.

With a general bullishness amongst the heavyweights, some big names have jumped into CorVel Corporation (NASDAQ:CRVL) headfirst. Marshall Wace LLP, managed by Paul Marshall and Ian Wace, assembled the most outsized position in CorVel Corporation (NASDAQ:CRVL). Marshall Wace LLP had $0.4 million invested in the company at the end of the quarter. Jeffrey Talpins’s Element Capital Management also made a $0.3 million investment in the stock during the quarter. The only other fund with a brand new CRVL position is Chuck Royce’s Royce & Associates.

As you can see these stocks had an average of 16.75 hedge funds with bullish positions and the average amount invested in these stocks was $122 million. That figure was $121 million in CRVL’s case. Adient plc (NYSE:ADNT) is the most popular stock in this table. On the other hand Portfolio Recovery Associates, Inc. (NASDAQ:PRAA) is the least popular one with only 11 bullish hedge fund positions. CorVel Corporation (NASDAQ:CRVL) is not the least popular stock in this group but hedge fund interest is still below average. Our calculations showed that top 20 most popular stocks among hedge funds returned 6.2% in Q2 through June 19th and outperformed the S&P 500 ETF (SPY) by nearly 3 percentage points. A small number of hedge funds were also right about betting on CRVL as the stock returned 28% during the same time frame and outperformed the market by an even larger margin.