With the first-quarter round of 13F filings behind us it is time to take a look at the stocks in which some of the best money managers in the world preferred to invest or sell heading into the first quarter. One of these stocks was Corenergy Infrastructure Trust Inc (NYSE:CORR).

Corenergy Infrastructure Trust Inc (NYSE:CORR) was in 11 hedge funds’ portfolios at the end of March. CORR investors should pay attention to an increase in activity from the world’s largest hedge funds recently. There were 7 hedge funds in our database with CORR holdings at the end of the previous quarter. Our calculations also showed that corr isn’t among the 30 most popular stocks among hedge funds.

In the eyes of most investors, hedge funds are perceived as unimportant, old financial tools of years past. While there are greater than 8000 funds trading at the moment, Our researchers look at the leaders of this group, approximately 750 funds. It is estimated that this group of investors oversee the lion’s share of the hedge fund industry’s total capital, and by keeping track of their inimitable picks, Insider Monkey has found a number of investment strategies that have historically surpassed the S&P 500 index. Insider Monkey’s flagship hedge fund strategy surpassed the S&P 500 index by around 5 percentage points annually since its inception in May 2014 through June 18th. We were able to generate large returns even by identifying short candidates. Our portfolio of short stocks lost 28.2% since February 2017 (through June 18th) even though the market was up nearly 30% during the same period. We just shared a list of 5 short targets in our latest quarterly update and they are already down an average of 8.2% in a month whereas our long picks outperformed the market by 2.5 percentage points in this volatile 5 week period (our long picks also beat the market by 15 percentage points so far this year).

What have hedge funds been doing with Corenergy Infrastructure Trust Inc (NYSE:CORR)?

Heading into the second quarter of 2019, a total of 11 of the hedge funds tracked by Insider Monkey held long positions in this stock, a change of 57% from one quarter earlier. On the other hand, there were a total of 8 hedge funds with a bullish position in CORR a year ago. With hedgies’ sentiment swirling, there exists a select group of noteworthy hedge fund managers who were boosting their holdings meaningfully (or already accumulated large positions). 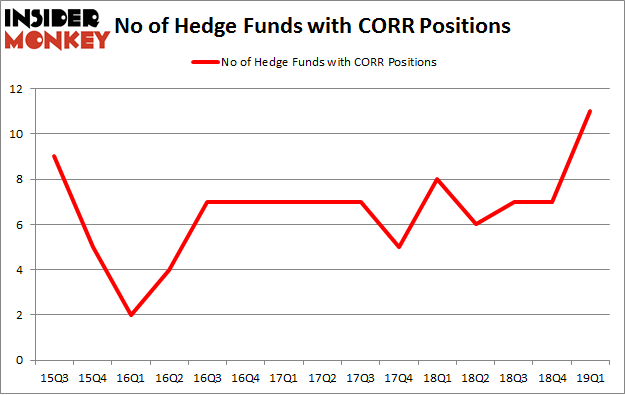 According to Insider Monkey’s hedge fund database, Renaissance Technologies, managed by Jim Simons, holds the biggest position in Corenergy Infrastructure Trust Inc (NYSE:CORR). Renaissance Technologies has a $33.3 million position in the stock, comprising less than 0.1%% of its 13F portfolio. Sitting at the No. 2 spot is Peter Rathjens, Bruce Clarke and John Campbell of Arrowstreet Capital, with a $6.2 million position; less than 0.1%% of its 13F portfolio is allocated to the stock. Remaining members of the smart money that are bullish contain John Overdeck and David Siegel’s Two Sigma Advisors, Ken Griffin’s Citadel Investment Group and David Harding’s Winton Capital Management.

With a general bullishness amongst the heavyweights, key hedge funds were leading the bulls’ herd. Winton Capital Management, managed by David Harding, initiated the most outsized position in Corenergy Infrastructure Trust Inc (NYSE:CORR). Winton Capital Management had $0.5 million invested in the company at the end of the quarter. Bruce Kovner’s Caxton Associates LP also made a $0.3 million investment in the stock during the quarter. The other funds with new positions in the stock are Paul Marshall and Ian Wace’s Marshall Wace LLP, Matthew Tewksbury’s Stevens Capital Management, and Israel Englander’s Millennium Management.

As you can see these stocks had an average of 14.5 hedge funds with bullish positions and the average amount invested in these stocks was $86 million. That figure was $43 million in CORR’s case. CURO Group Holdings Corp. (NYSE:CURO) is the most popular stock in this table. On the other hand PennantPark Investment Corp. (NASDAQ:PNNT) is the least popular one with only 9 bullish hedge fund positions. Corenergy Infrastructure Trust Inc (NYSE:CORR) is not the least popular stock in this group but hedge fund interest is still below average. Our calculations showed that top 20 most popular stocks among hedge funds returned 6.2% in Q2 through June 19th and outperformed the S&P 500 ETF (SPY) by nearly 3 percentage points. A small number of hedge funds were also right about betting on CORR as the stock returned 11.8% during the same time frame and outperformed the market by an even larger margin.