The 700+ hedge funds and famous money managers tracked by Insider Monkey have already compiled and submitted their 13F filings for the first quarter, which unveil their equity positions as of March 31. We went through these filings, fixed typos and other more significant errors and identified the changes in hedge fund portfolios. Our extensive review of these public filings is finally over, so this article is set to reveal the smart money sentiment towards Colliers International Group Inc (NASDAQ:CIGI).

Colliers International Group Inc (NASDAQ:CIGI) investors should pay attention to an increase in support from the world’s most elite money managers of late. CIGI was in 14 hedge funds’ portfolios at the end of the first quarter of 2019. There were 13 hedge funds in our database with CIGI positions at the end of the previous quarter. Our calculations also showed that CIGI isn’t among the 30 most popular stocks among hedge funds. 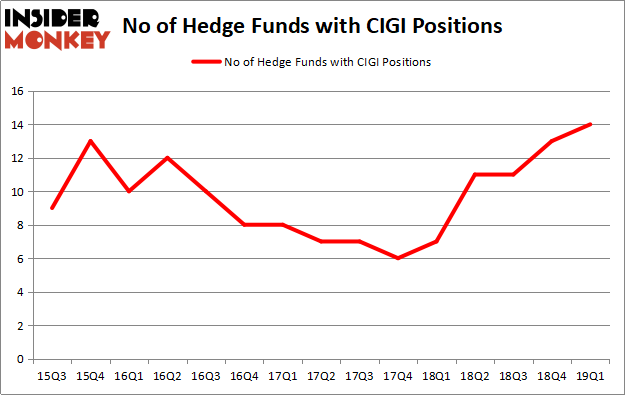 Among these funds, Spruce House Investment Management held the most valuable stake in Colliers International Group Inc (NASDAQ:CIGI), which was worth $400.3 million at the end of the first quarter. On the second spot was BloombergSen which amassed $158.2 million worth of shares. Moreover, Renaissance Technologies, Waratah Capital Advisors, and Millennium Management were also bullish on Colliers International Group Inc (NASDAQ:CIGI), allocating a large percentage of their portfolios to this stock.

As industrywide interest jumped, key money managers were leading the bulls’ herd. BlueCrest Capital Mgmt., managed by Michael Platt and William Reeves, created the most outsized position in Colliers International Group Inc (NASDAQ:CIGI). BlueCrest Capital Mgmt. had $0.4 million invested in the company at the end of the quarter. George Zweig, Shane Haas and Ravi Chander’s Signition LP also made a $0.2 million investment in the stock during the quarter.

Let’s check out hedge fund activity in other stocks – not necessarily in the same industry as Colliers International Group Inc (NASDAQ:CIGI) but similarly valued. We will take a look at Akcea Therapeutics, Inc. (NASDAQ:AKCA), Crestwood Equity Partners LP (NYSE:CEQP), Korn Ferry (NYSE:KFY), and HMS Holdings Corp. (NASDAQ:HMSY). All of these stocks’ market caps are similar to CIGI’s market cap.

As you can see these stocks had an average of 14.5 hedge funds with bullish positions and the average amount invested in these stocks was $83 million. That figure was $671 million in CIGI’s case. HMS Holdings Corp. (NASDAQ:HMSY) is the most popular stock in this table. On the other hand Crestwood Equity Partners LP (NYSE:CEQP) is the least popular one with only 4 bullish hedge fund positions. Colliers International Group Inc (NASDAQ:CIGI) is not the least popular stock in this group but hedge fund interest is still below average. Our calculations showed that top 20 most popular stocks among hedge funds returned 6.2% in Q2 through June 19th and outperformed the S&P 500 ETF (SPY) by nearly 3 percentage points. A small number of hedge funds were also right about betting on CIGI, though not to the same extent, as the stock returned 5.8% during the same time frame and outperformed the market as well.