Hedge Funds Have Never Been This Bullish On Clearway Energy, Inc. (CWEN)

Is Clearway Energy, Inc. (NYSE:CWEN) a healthy stock for your portfolio? Money managers are taking a bullish view. The number of long hedge fund positions inched up by 15 in recent months. Our calculations also showed that cwen isn’t among the 30 most popular stocks among hedge funds.

At Q1’s end, a total of 27 of the hedge funds tracked by Insider Monkey were bullish on this stock, a change of 125% from the previous quarter. The graph below displays the number of hedge funds with bullish position in CWEN over the last 15 quarters. With hedge funds’ positions undergoing their usual ebb and flow, there exists a select group of notable hedge fund managers who were upping their stakes substantially (or already accumulated large positions). 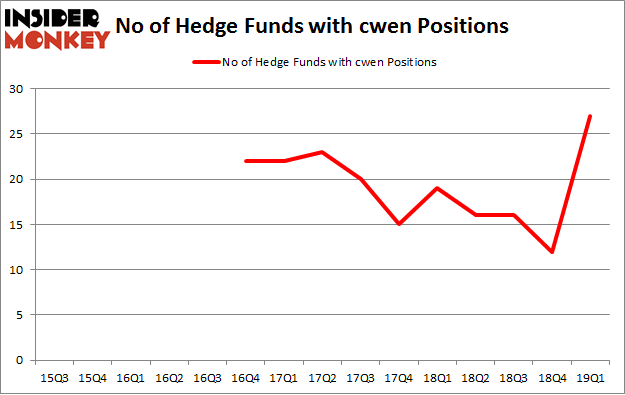 Among these funds, Renaissance Technologies held the most valuable stake in Clearway Energy, Inc. (NYSE:CWEN), which was worth $34.7 million at the end of the first quarter. On the second spot was Renaissance Technologies which amassed $15.7 million worth of shares. Moreover, Appaloosa Management LP, Blackstart Capital, and Governors Lane were also bullish on Clearway Energy, Inc. (NYSE:CWEN), allocating a large percentage of their portfolios to this stock.

With a general bullishness amongst the heavyweights, specific money managers were leading the bulls’ herd. Appaloosa Management LP, managed by David Tepper, assembled the most valuable position in Clearway Energy, Inc. (NYSE:CWEN). Appaloosa Management LP had $12.8 million invested in the company at the end of the quarter. Brian Olson, Baehyun Sung, and Jamie Waters’s Blackstart Capital also made a $10 million investment in the stock during the quarter. The following funds were also among the new CWEN investors: Isaac Corre’s Governors Lane, Shawn Bergerson and Martin Kalish’s Waterstone Capital Management, and Edward A. Mule’s Silver Point Capital.

As you can see these stocks had an average of 21.25 hedge funds with bullish positions and the average amount invested in these stocks was $326 million. That figure was $155 million in CWEN’s case. frontdoor, inc. (NASDAQ:FTDR) is the most popular stock in this table. On the other hand MorphoSys AG (NASDAQ:MOR) is the least popular one with only 7 bullish hedge fund positions. Clearway Energy, Inc. (NYSE:CWEN) is not the most popular stock in this group but hedge fund interest is still above average. Our calculations showed that top 20 most popular stocks among hedge funds returned 1.9% in Q2 through May 30th and outperformed the S&P 500 ETF (SPY) by more than 3 percentage points. Hedge funds were also right about betting on CWEN, though not to the same extent, as the stock returned 0.3% during the same time frame and outperformed the market as well.