Hedge Funds Have Never Been This Bullish On Chegg Inc (CHGG)

Chegg Inc (NYSE:CHGG) was in 36 hedge funds’ portfolios at the end of March. CHGG investors should pay attention to an increase in hedge fund interest in recent months. There were 21 hedge funds in our database with CHGG holdings at the end of the previous quarter. Our calculations also showed that chgg isn’t among the 30 most popular stocks among hedge funds. 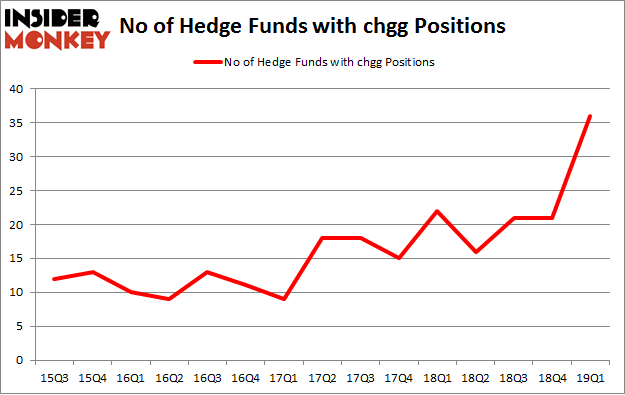 Of the funds tracked by Insider Monkey, Daniel Patrick Gibson’s Sylebra Capital Management has the biggest position in Chegg Inc (NYSE:CHGG), worth close to $134.6 million, comprising 7.9% of its total 13F portfolio. Sitting at the No. 2 spot is Hitchwood Capital Management, managed by James Crichton, which holds a $47.8 million position; 0.7% of its 13F portfolio is allocated to the company. Other professional money managers that hold long positions contain Ken Griffin’s Citadel Investment Group, Brian Ashford-Russell and Tim Woolley’s Polar Capital and Principal Global Investors’s Columbus Circle Investors.

As aggregate interest increased, specific money managers were breaking ground themselves. D E Shaw, managed by D. E. Shaw, initiated the most outsized call position in Chegg Inc (NYSE:CHGG). D E Shaw had $21 million invested in the company at the end of the quarter. Doug Gordon, Jon Hilsabeck and Don Jabro’s Shellback Capital also made a $16.4 million investment in the stock during the quarter. The other funds with new positions in the stock are Jim Simons’s Renaissance Technologies, Matthew Hulsizer’s PEAK6 Capital Management, and Peter Rathjens, Bruce Clarke and John Campbell’s Arrowstreet Capital.

As you can see these stocks had an average of 20.5 hedge funds with bullish positions and the average amount invested in these stocks was $178 million. That figure was $512 million in CHGG’s case. Pluralsight, Inc. (NASDAQ:PS) is the most popular stock in this table. On the other hand Compañía de Minas Buenaventura S.A.A. (NYSE:BVN) is the least popular one with only 7 bullish hedge fund positions. Compared to these stocks Chegg Inc (NYSE:CHGG) is more popular among hedge funds. Our calculations showed that top 20 most popular stocks among hedge funds returned 1.9% in Q2 through May 30th and outperformed the S&P 500 ETF (SPY) by more than 3 percentage points. Hedge funds were also right about betting on CHGG, though not to the same extent, as the stock returned -0.7% during the same period and outperformed the market as well.