Hedge Funds Have Never Been This Bullish On Carvana Co. (CVNA)

With the first-quarter round of 13F filings behind us it is time to take a look at the stocks in which some of the best money managers in the world preferred to invest or sell heading into the first quarter. One of these stocks was Carvana Co. (NYSE:CVNA).

How have hedgies been trading Carvana Co. (NYSE:CVNA)? 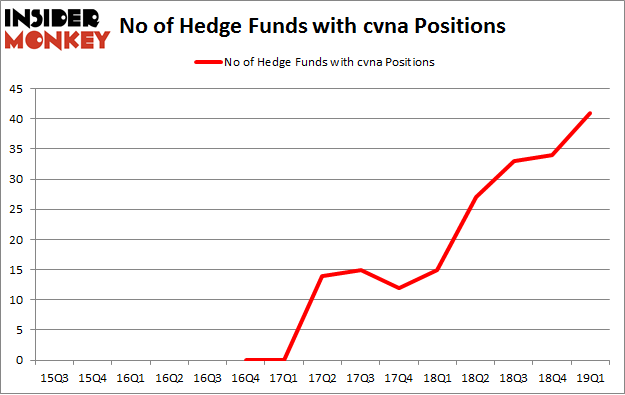 The largest stake in Carvana Co. (NYSE:CVNA) was held by Spruce House Investment Management, which reported holding $325.1 million worth of stock at the end of March. It was followed by CAS Investment Partners with a $146.6 million position. Other investors bullish on the company included Tiger Global Management, Whale Rock Capital Management, and Goodnow Investment Group.

As industrywide interest jumped, some big names have jumped into Carvana Co. (NYSE:CVNA) headfirst. Tiger Global Management, managed by Chase Coleman, established the largest position in Carvana Co. (NYSE:CVNA). Tiger Global Management had $119 million invested in the company at the end of the quarter. James Crichton’s Hitchwood Capital Management also made a $40.6 million investment in the stock during the quarter. The other funds with new positions in the stock are Seymour Sy Kaufman and Michael Stark’s Crosslink Capital, Mike Ogborne’s Ogborne Capital, and Leon Shaulov’s Maplelane Capital.

As you can see these stocks had an average of 23.75 hedge funds with bullish positions and the average amount invested in these stocks was $529 million. That figure was $1613 million in CVNA’s case. DocuSign, Inc. (NASDAQ:DOCU) is the most popular stock in this table. On the other hand Brookfield Property Partners LP (NASDAQ:BPY) is the least popular one with only 8 bullish hedge fund positions. Compared to these stocks Carvana Co. (NYSE:CVNA) is more popular among hedge funds. Our calculations showed that top 20 most popular stocks among hedge funds returned 1.9% in Q2 through May 30th and outperformed the S&P 500 ETF (SPY) by more than 3 percentage points. Hedge funds were also right about betting on CVNA, though not to the same extent, as the stock returned 1.2% during the same period and outperformed the market as well.