Hedge funds are not perfect. They have their bad picks just like everyone else. Facebook, a stock hedge funds have loved dearly, lost nearly 40% of its value at one point in 2018. Although hedge funds are not perfect, their consensus picks do deliver solid returns, however. Our data show the top 20 S&P 500 stocks among hedge funds beat the S&P 500 Index by more than 6 percentage points so far in 2019. Because hedge funds have a lot of resources and their consensus picks do well, we pay attention to what they think. In this article, we analyze what the elite funds think of Biohaven Pharmaceutical Holding Company Ltd. (NYSE:BHVN).

Is Biohaven Pharmaceutical Holding Company Ltd. (NYSE:BHVN) the right investment to pursue these days? Prominent investors are betting on the stock. The number of long hedge fund bets rose by 11 lately. Our calculations also showed that bhvn isn’t among the 30 most popular stocks among hedge funds. BHVN was in 33 hedge funds’ portfolios at the end of March. There were 22 hedge funds in our database with BHVN positions at the end of the previous quarter.

To most shareholders, hedge funds are viewed as slow, old financial vehicles of the past. While there are greater than 8000 funds with their doors open at present, Our researchers choose to focus on the masters of this club, about 750 funds. These investment experts oversee most of all hedge funds’ total capital, and by tailing their highest performing picks, Insider Monkey has revealed numerous investment strategies that have historically exceeded the broader indices. Insider Monkey’s flagship hedge fund strategy surpassed the S&P 500 index by around 5 percentage points per annum since its inception in May 2014 through the end of May. We were able to generate large returns even by identifying short candidates. Our portfolio of short stocks lost 30.9% since February 2017 (through May 30th) even though the market was up nearly 24% during the same period. We just shared a list of 5 short targets in our latest quarterly update and they are already down an average of 11.9% in less than a couple of weeks whereas our long picks outperformed the market by 2 percentage points in this volatile 2 week period.

At Q1’s end, a total of 33 of the hedge funds tracked by Insider Monkey held long positions in this stock, a change of 50% from one quarter earlier. Below, you can check out the change in hedge fund sentiment towards BHVN over the last 15 quarters. With hedgies’ positions undergoing their usual ebb and flow, there exists a select group of key hedge fund managers who were adding to their holdings significantly (or already accumulated large positions). 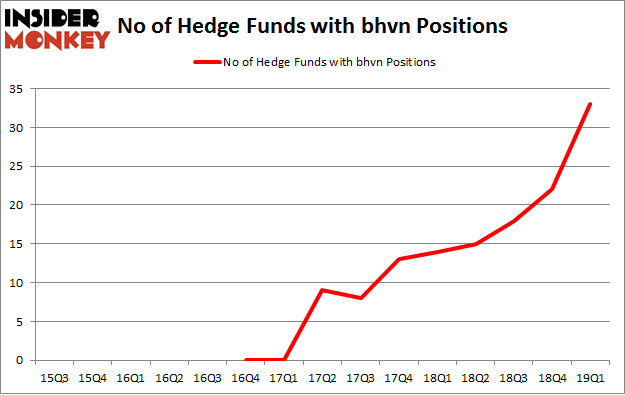 Now, some big names were leading the bulls’ herd. Ghost Tree Capital, managed by Ken Greenberg and David Kim, assembled the biggest call position in Biohaven Pharmaceutical Holding Company Ltd. (NYSE:BHVN). Ghost Tree Capital had $7.9 million invested in the company at the end of the quarter. Arthur B Cohen and Joseph Healey’s Healthcor Management LP also made a $7.8 million investment in the stock during the quarter. The other funds with new positions in the stock are Mark Kingdon’s Kingdon Capital, Bain Capital’s Brookside Capital, and Brad Farber’s Atika Capital.

As you can see these stocks had an average of 14 hedge funds with bullish positions and the average amount invested in these stocks was $85 million. That figure was $386 million in BHVN’s case. PolyOne Corporation (NYSE:POL) is the most popular stock in this table. On the other hand Independent Bank Corp (NASDAQ:INDB) is the least popular one with only 6 bullish hedge fund positions. Compared to these stocks Biohaven Pharmaceutical Holding Company Ltd. (NYSE:BHVN) is more popular among hedge funds. Our calculations showed that top 20 most popular stocks among hedge funds returned 1.9% in Q2 through May 30th and outperformed the S&P 500 ETF (SPY) by more than 3 percentage points. Hedge funds were also right about betting on BHVN as the stock returned 9.9% during the same period and outperformed the market by an even larger margin. Hedge funds were clearly right about piling into this stock relative to other stocks with similar market capitalizations.