Hedge Funds Have Never Been This Bullish On Axsome Therapeutics, Inc. (AXSM)

Axsome Therapeutics, Inc. (NASDAQ:AXSM) has experienced an increase in hedge fund interest recently. AXSM was in 14 hedge funds’ portfolios at the end of March. There were 6 hedge funds in our database with AXSM positions at the end of the previous quarter. Our calculations also showed that AXSM isn’t among the 30 most popular stocks among hedge funds.

At the end of the first quarter, a total of 14 of the hedge funds tracked by Insider Monkey held long positions in this stock, a change of 133% from the previous quarter. Below, you can check out the change in hedge fund sentiment towards AXSM over the last 15 quarters. With the smart money’s sentiment swirling, there exists an “upper tier” of key hedge fund managers who were increasing their holdings meaningfully (or already accumulated large positions). 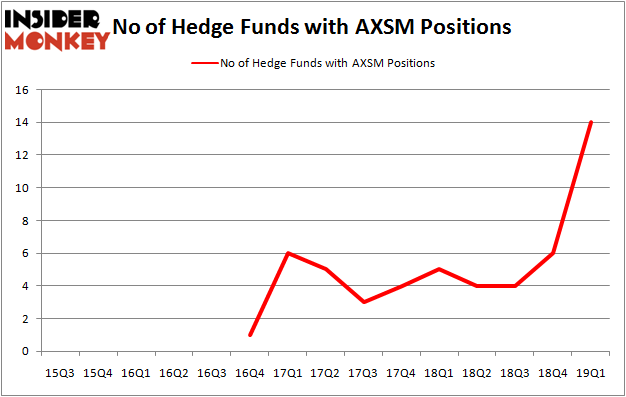 Consequently, key money managers have been driving this bullishness. RA Capital Management, managed by Peter Kolchinsky, established the most valuable position in Axsome Therapeutics, Inc. (NASDAQ:AXSM). RA Capital Management had $46.9 million invested in the company at the end of the quarter. Julian Baker and Felix Baker’s Baker Bros. Advisors also made a $17.1 million investment in the stock during the quarter. The other funds with brand new AXSM positions are Ken Greenberg and David Kim’s Ghost Tree Capital, Benjamin A. Smith’s Laurion Capital Management, and Efrem Kamen’s Pura Vida Investments.

As you can see these stocks had an average of 12 hedge funds with bullish positions and the average amount invested in these stocks was $40 million. That figure was $93 million in AXSM’s case. Mitek Systems, Inc. (NASDAQ:MITK) is the most popular stock in this table. On the other hand NVE Corporation (NASDAQ:NVEC) is the least popular one with only 4 bullish hedge fund positions. Axsome Therapeutics, Inc. (NASDAQ:AXSM) is not the most popular stock in this group but hedge fund interest is still above average. Our calculations showed that top 20 most popular stocks among hedge funds returned 6.2% in Q2 through June 19th and outperformed the S&P 500 ETF (SPY) by nearly 3 percentage points. Hedge funds were also right about betting on AXSM as the stock returned 74.1% during the same period and outperformed the market by an even larger margin. Hedge funds were rewarded for their relative bullishness.