Hedge Funds Have Never Been This Bullish On ASML Holding N.V. (ASML)

In these volatile markets we scrutinize hedge fund filings to get a reading on which direction each stock might be going. Out of thousands of stocks that are currently traded on the market, it is difficult to identify those that will really generate strong returns. Hedge funds and institutional investors spend millions of dollars on analysts with MBAs and PhDs, who are industry experts and well connected to other industry and media insiders on top of that. Individual investors can piggyback the hedge funds employing these talents and can benefit from their vast resources and knowledge in that way. We analyze quarterly 13F filings of nearly 835 hedge funds and, by looking at the smart money sentiment that surrounds a stock, we can determine whether it has the potential to beat the market over the long-term. Therefore, let’s take a closer look at what smart money thinks about ASML Holding N.V. (NASDAQ:ASML).

Is ASML Holding N.V. (NASDAQ:ASML) an excellent investment now? Investors who are in the know are getting more optimistic. The number of bullish hedge fund bets went up by 7 lately. Our calculations also showed that ASML isn’t among the 30 most popular stocks among hedge funds (click for Q4 rankings and see the video below for Q3 rankings). ASML was in 22 hedge funds’ portfolios at the end of the fourth quarter of 2019. There were 15 hedge funds in our database with ASML holdings at the end of the previous quarter.

Today there are numerous formulas stock market investors use to size up their holdings. Some of the most innovative formulas are hedge fund and insider trading moves. Our researchers have shown that, historically, those who follow the top picks of the best fund managers can outperform the S&P 500 by a healthy amount (see the details here).

We leave no stone unturned when looking for the next great investment idea. For example Europe is set to become the world’s largest cannabis market, so we check out this European marijuana stock pitch. We read hedge fund investor letters and listen to stock pitches at hedge fund conferences, and and go through short-term trade recommendations like this one. We even check out the recommendations of services with hard to believe track records. In January, we recommended a long position in one of the most shorted stocks in the market, and that stock returned more than 50% despite the large losses in the market since our recommendation. Now we’re going to take a look at the key hedge fund action regarding ASML Holding N.V. (NASDAQ:ASML).

At the end of the fourth quarter, a total of 22 of the hedge funds tracked by Insider Monkey were bullish on this stock, a change of 47% from the third quarter of 2019. The graph below displays the number of hedge funds with bullish position in ASML over the last 18 quarters. With the smart money’s positions undergoing their usual ebb and flow, there exists a few notable hedge fund managers who were increasing their holdings substantially (or already accumulated large positions). 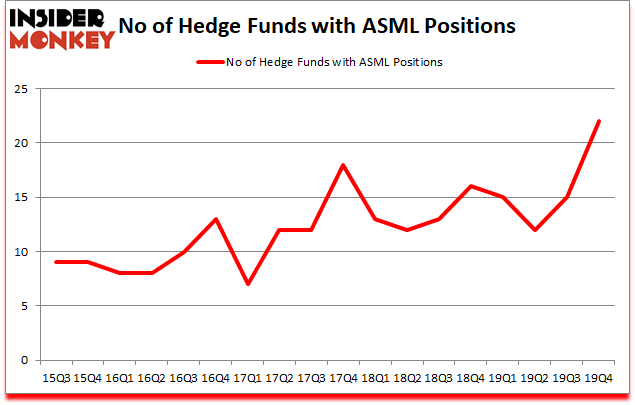 According to publicly available hedge fund and institutional investor holdings data compiled by Insider Monkey, Ken Fisher’s Fisher Asset Management has the biggest position in ASML Holding N.V. (NASDAQ:ASML), worth close to $749.1 million, comprising 0.8% of its total 13F portfolio. On Fisher Asset Management’s heels is Peter Rathjens, Bruce Clarke and John Campbell of Arrowstreet Capital, with a $94.8 million position; 0.2% of its 13F portfolio is allocated to the stock. Some other professional money managers that are bullish contain D. E. Shaw’s D E Shaw, Michael Rockefeller and Karl Kroeker’s Woodline Partners and Glen Kacher’s Light Street Capital. In terms of the portfolio weights assigned to each position Breakline Capital allocated the biggest weight to ASML Holding N.V. (NASDAQ:ASML), around 3.42% of its 13F portfolio. Light Street Capital is also relatively very bullish on the stock, setting aside 2.88 percent of its 13F equity portfolio to ASML.

As one would reasonably expect, key hedge funds have jumped into ASML Holding N.V. (NASDAQ:ASML) headfirst. Woodline Partners, managed by Michael Rockefeller and Karl Kroeker, created the biggest position in ASML Holding N.V. (NASDAQ:ASML). Woodline Partners had $60 million invested in the company at the end of the quarter. Glen Kacher’s Light Street Capital also initiated a $48.2 million position during the quarter. The other funds with new positions in the stock are Ken Griffin’s Citadel Investment Group, Tor Minesuk’s Mondrian Capital, and Kevin McCarthy’s Breakline Capital.

As you can see these stocks had an average of 42.5 hedge funds with bullish positions and the average amount invested in these stocks was $1470 million. That figure was $1133 million in ASML’s case. Texas Instruments Incorporated (NASDAQ:TXN) is the most popular stock in this table. On the other hand BHP Billiton plc (NYSE:BBL) is the least popular one with only 24 bullish hedge fund positions. Compared to these stocks ASML Holding N.V. (NASDAQ:ASML) is even less popular than BBL. Hedge funds clearly dropped the ball on ASML as the stock delivered strong returns, though hedge funds’ consensus picks still generated respectable returns. Our calculations showed that top 20 most popular stocks among hedge funds returned 41.3% in 2019 and outperformed the S&P 500 ETF (SPY) by 10.1 percentage points. These stocks lost 11.7% in 2020 through March 11th but still beat the market by 3.1 percentage points. A small number of hedge funds were also right about betting on ASML as the stock returned -10.7% during the same time period and outperformed the market by an even larger margin.