Hedge Funds Have Never Been This Bullish On Arthur J. Gallagher & Co. (AJG)

The 700+ hedge funds and famous money managers tracked by Insider Monkey have already compiled and submitted their 13F filings for the first quarter, which unveil their equity positions as of March 31. We went through these filings, fixed typos and other more significant errors and identified the changes in hedge fund portfolios. Our extensive review of these public filings is finally over, so this article is set to reveal the smart money sentiment towards Arthur J. Gallagher & Co. (NYSE:AJG).

Is Arthur J. Gallagher & Co. (NYSE:AJG) going to take off soon? The smart money is turning bullish. The number of long hedge fund positions inched up by 6 in recent months. Our calculations also showed that AJG isn’t among the 30 most popular stocks among hedge funds. AJG was in 28 hedge funds’ portfolios at the end of March. There were 22 hedge funds in our database with AJG holdings at the end of the previous quarter.

What does the smart money think about Arthur J. Gallagher & Co. (NYSE:AJG)? 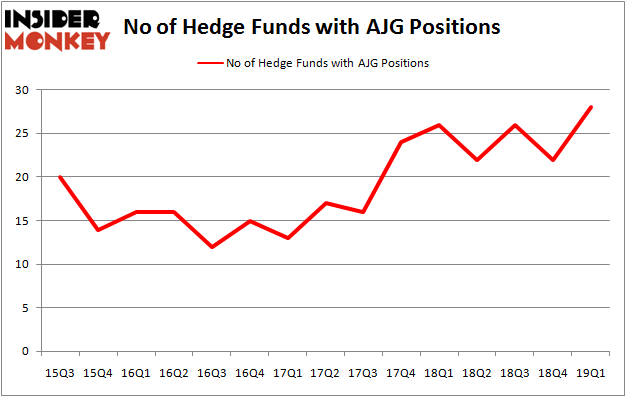 Of the funds tracked by Insider Monkey, Balyasny Asset Management, managed by Dmitry Balyasny, holds the biggest position in Arthur J. Gallagher & Co. (NYSE:AJG). Balyasny Asset Management has a $85.3 million position in the stock, comprising 0.6% of its 13F portfolio. Sitting at the No. 2 spot is Phill Gross and Robert Atchinson of Adage Capital Management, with a $47.6 million position; 0.1% of its 13F portfolio is allocated to the company. Some other hedge funds and institutional investors with similar optimism contain Andreas Halvorsen’s Viking Global, Jim Simons’s Renaissance Technologies and Israel Englander’s Millennium Management.

As one would reasonably expect, key money managers have been driving this bullishness. Renaissance Technologies, managed by Jim Simons, initiated the most valuable position in Arthur J. Gallagher & Co. (NYSE:AJG). Renaissance Technologies had $28.7 million invested in the company at the end of the quarter. Ken Griffin’s Citadel Investment Group also made a $25.2 million investment in the stock during the quarter. The other funds with brand new AJG positions are John Overdeck and David Siegel’s Two Sigma Advisors, Anand Parekh’s Alyeska Investment Group, and Michael Platt and William Reeves’s BlueCrest Capital Mgmt..

As you can see these stocks had an average of 29.75 hedge funds with bullish positions and the average amount invested in these stocks was $834 million. That figure was $322 million in AJG’s case. Regions Financial Corporation (NYSE:RF) is the most popular stock in this table. On the other hand ZTO Express (Cayman) Inc. (NYSE:ZTO) is the least popular one with only 16 bullish hedge fund positions. Arthur J. Gallagher & Co. (NYSE:AJG) is not the least popular stock in this group but hedge fund interest is still below average. Our calculations showed that top 20 most popular stocks among hedge funds returned 1.9% in Q2 through May 30th and outperformed the S&P 500 ETF (SPY) by more than 3 percentage points. A small number of hedge funds were also right about betting on AJG as the stock returned 8.2% during the same time frame and outperformed the market by an even larger margin.