Argo Group International Holdings, Ltd. (NYSE:ARGO) has seen an increase in activity from the world’s largest hedge funds in recent months. ARGO was in 17 hedge funds’ portfolios at the end of March. There were 13 hedge funds in our database with ARGO positions at the end of the previous quarter. Our calculations also showed that argo isn’t among the 30 most popular stocks among hedge funds.

To the average investor there are several methods stock traders can use to assess publicly traded companies. A couple of the most underrated methods are hedge fund and insider trading activity. Our experts have shown that, historically, those who follow the top picks of the elite investment managers can outpace the S&P 500 by a significant margin (see the details here). 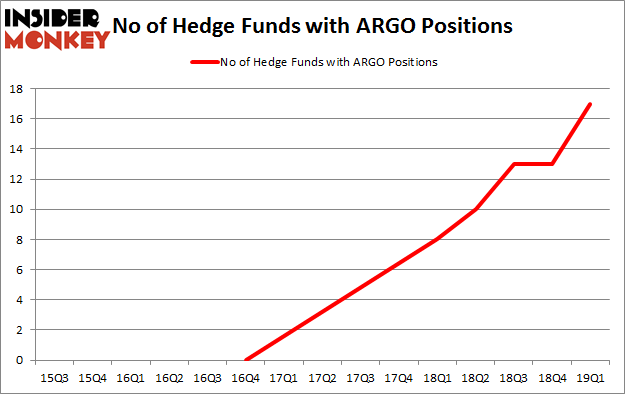 Among these funds, Voce Capital held the most valuable stake in Argo Group International Holdings, Ltd. (NYSE:ARGO), which was worth $134.5 million at the end of the first quarter. On the second spot was Pzena Investment Management which amassed $33.2 million worth of shares. Moreover, AQR Capital Management, GAMCO Investors, and GLG Partners were also bullish on Argo Group International Holdings, Ltd. (NYSE:ARGO), allocating a large percentage of their portfolios to this stock.

With a general bullishness amongst the heavyweights, key money managers have jumped into Argo Group International Holdings, Ltd. (NYSE:ARGO) headfirst. Marshall Wace LLP, managed by Paul Marshall and Ian Wace, initiated the most outsized position in Argo Group International Holdings, Ltd. (NYSE:ARGO). Marshall Wace LLP had $1 million invested in the company at the end of the quarter. David Costen Haley’s HBK Investments also made a $0.7 million investment in the stock during the quarter. The other funds with brand new ARGO positions are Paul Tudor Jones’s Tudor Investment Corp, Mike Vranos’s Ellington, and Louis Navellier’s Navellier & Associates.

As you can see these stocks had an average of 17.5 hedge funds with bullish positions and the average amount invested in these stocks was $292 million. That figure was $200 million in ARGO’s case. WESCO International, Inc. (NYSE:WCC) is the most popular stock in this table. On the other hand Columbia Banking System Inc (NASDAQ:COLB) is the least popular one with only 8 bullish hedge fund positions. Argo Group International Holdings, Ltd. (NYSE:ARGO) is not the least popular stock in this group but hedge fund interest is still below average. Our calculations showed that top 20 most popular stocks among hedge funds returned 6.2% in Q2 through June 19th and outperformed the S&P 500 ETF (SPY) by nearly 3 percentage points. A small number of hedge funds were also right about betting on ARGO as the stock returned 7.4% during the same time frame and outperformed the market by an even larger margin.