Before we spend days researching a stock idea we like to take a look at how hedge funds and billionaire investors recently traded that stock. The S&P 500 Index ETF (SPY) lost 2.6% in the first two months of the second quarter. Ten out of 11 industry groups in the S&P 500 Index lost value in May. The average return of a randomly picked stock in the index was even worse (-3.6%). This means you (or a monkey throwing a dart) have less than an even chance of beating the market by randomly picking a stock. On the other hand, the top 20 most popular S&P 500 stocks among hedge funds not only generated positive returns but also outperformed the index by about 3 percentage points through May 30th. In this article, we will take a look at what hedge funds think about Apyx Medical Corporation (NASDAQ:APYX).

Is Apyx Medical Corporation (NASDAQ:APYX) going to take off soon? The best stock pickers are in an optimistic mood. The number of bullish hedge fund bets inched up by 4 lately. Our calculations also showed that apyx isn’t among the 30 most popular stocks among hedge funds. 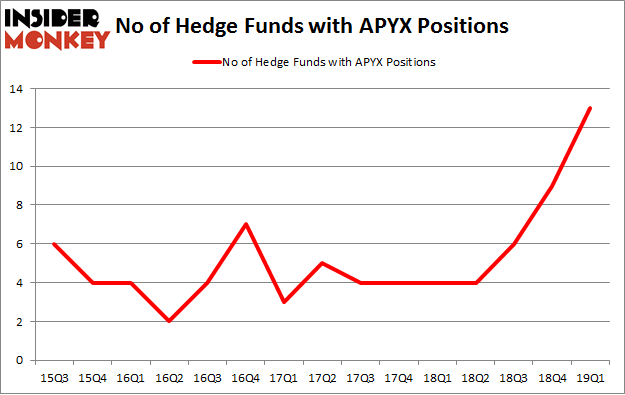 The largest stake in Apyx Medical Corporation (NASDAQ:APYX) was held by Archon Capital Management, which reported holding $9.6 million worth of stock at the end of March. It was followed by Royce & Associates with a $4.8 million position. Other investors bullish on the company included Renaissance Technologies, Horizon Asset Management, and Millennium Management.

Now, some big names have jumped into Apyx Medical Corporation (NASDAQ:APYX) headfirst. Archon Capital Management, managed by Constantinos J. Christofilis, assembled the most outsized position in Apyx Medical Corporation (NASDAQ:APYX). Archon Capital Management had $9.6 million invested in the company at the end of the quarter. Chuck Royce’s Royce & Associates also made a $4.8 million investment in the stock during the quarter. The other funds with new positions in the stock are Jim Simons’s Renaissance Technologies, Murray Stahl’s Horizon Asset Management, and Israel Englander’s Millennium Management.

As you can see these stocks had an average of 8.5 hedge funds with bullish positions and the average amount invested in these stocks was $53 million. That figure was $28 million in APYX’s case. Del Frisco’s Restaurant Group Inc (NASDAQ:DFRG) is the most popular stock in this table. On the other hand Nemaura Medical Inc. (NASDAQ:NMRD) is the least popular one with only 1 bullish hedge fund positions. Apyx Medical Corporation (NASDAQ:APYX) is not the most popular stock in this group but hedge fund interest is still above average. Our calculations showed that top 20 most popular stocks among hedge funds returned 6.2% in Q2 through June 19th and outperformed the S&P 500 ETF (SPY) by nearly 3 percentage points. Hedge funds were also right about betting on APYX, though not to the same extent, as the stock returned 5.4% during the same time frame and outperformed the market as well.