Hedge Funds Have Never Been This Bullish On Applied Materials, Inc. (AMAT)

Coronavirus is probably the #1 concern in investors’ minds right now. It should be. We estimate that COVID-19 will kill around 5 million people worldwide and there is a 3.3% probability that Donald Trump will die from the new coronavirus (read the details). In these volatile markets we scrutinize hedge fund filings to get a reading on which direction each stock might be going. Before we spend countless hours researching a company, we like to analyze what insiders, hedge funds and billionaire investors think of the stock first. This is a necessary first step in our investment process because our research has shown that the elite investors’ consensus returns have been exceptional. In the following paragraphs, we find out what the billionaire investors and hedge funds think of Applied Materials, Inc. (NASDAQ:AMAT).

Applied Materials, Inc. (NASDAQ:AMAT) investors should pay attention to an increase in hedge fund interest recently. AMAT was in 72 hedge funds’ portfolios at the end of the fourth quarter of 2019. There were 55 hedge funds in our database with AMAT positions at the end of the previous quarter. Our calculations also showed that AMAT isn’t among the 30 most popular stocks among hedge funds (click for Q4 rankings and see the video below for Q3 rankings).

In the 21st century investor’s toolkit there are numerous methods stock traders use to value publicly traded companies. A duo of the best methods are hedge fund and insider trading moves. Our researchers have shown that, historically, those who follow the best picks of the top investment managers can outperform the S&P 500 by a healthy amount (see the details here).

We leave no stone unturned when looking for the next great investment idea. For example Europe is set to become the world’s largest cannabis market, so we check out this European marijuana stock pitch. We read hedge fund investor letters and listen to stock pitches at hedge fund conferences, and and go through short-term trade recommendations like this one. We even check out the recommendations of services with hard to believe track records. In January, we recommended a long position in one of the most shorted stocks in the market, and that stock returned more than 50% despite the large losses in the market since our recommendation. Now let’s review the key hedge fund action surrounding Applied Materials, Inc. (NASDAQ:AMAT). 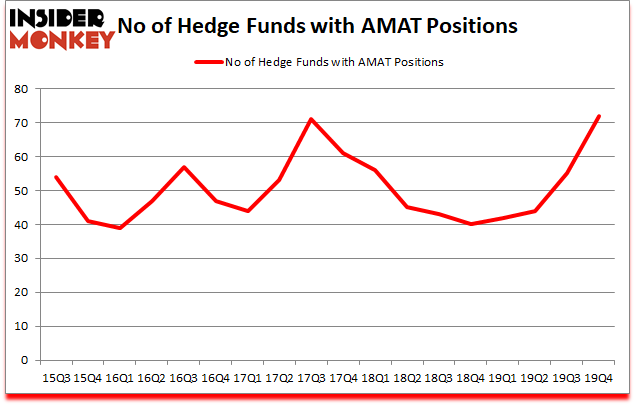 According to Insider Monkey’s hedge fund database, AQR Capital Management, managed by Cliff Asness, holds the number one position in Applied Materials, Inc. (NASDAQ:AMAT). AQR Capital Management has a $495.4 million position in the stock, comprising 0.6% of its 13F portfolio. Coming in second is Arrowstreet Capital, led by Peter Rathjens, Bruce Clarke and John Campbell, holding a $310.3 million position; the fund has 0.7% of its 13F portfolio invested in the stock. Some other professional money managers with similar optimism comprise David Goel and Paul Ferri’s Matrix Capital Management, David Blood and Al Gore’s Generation Investment Management and Alex Snow’s Lansdowne Partners. In terms of the portfolio weights assigned to each position Abrams Bison Investments allocated the biggest weight to Applied Materials, Inc. (NASDAQ:AMAT), around 17.09% of its 13F portfolio. Lansdowne Partners is also relatively very bullish on the stock, earmarking 6.86 percent of its 13F equity portfolio to AMAT.

With a general bullishness amongst the heavyweights, some big names were leading the bulls’ herd. Renaissance Technologies, created the largest position in Applied Materials, Inc. (NASDAQ:AMAT). Renaissance Technologies had $71.6 million invested in the company at the end of the quarter. Brandon Haley’s Holocene Advisors also initiated a $46.4 million position during the quarter. The other funds with brand new AMAT positions are Edmond M. Safra’s EMS Capital, Anand Parekh’s Alyeska Investment Group, and Charles Clough’s Clough Capital Partners.

Let’s now take a look at hedge fund activity in other stocks – not necessarily in the same industry as Applied Materials, Inc. (NASDAQ:AMAT) but similarly valued. We will take a look at Schlumberger Limited. (NYSE:SLB), Ecolab Inc. (NYSE:ECL), Global Payments Inc (NYSE:GPN), and Deere & Company (NYSE:DE). All of these stocks’ market caps resemble AMAT’s market cap.

As you can see these stocks had an average of 51.25 hedge funds with bullish positions and the average amount invested in these stocks was $2244 million. That figure was $3453 million in AMAT’s case. Global Payments Inc (NYSE:GPN) is the most popular stock in this table. On the other hand Ecolab Inc. (NYSE:ECL) is the least popular one with only 44 bullish hedge fund positions. Compared to these stocks Applied Materials, Inc. (NASDAQ:AMAT) is more popular among hedge funds. Our calculations showed that top 20 most popular stocks among hedge funds returned 41.3% in 2019 and outperformed the S&P 500 ETF (SPY) by 10.1 percentage points. These stocks also gained 0.1% in 2020 through March 2nd and beat the market by 4.1 percentage points. Hedge funds were also right about betting on AMAT, though not to the same extent, as the stock returned -1.1% during the first quarter (through March 2nd) and outperformed the market as well.