We at Insider Monkey have gone over 821 13F filings that hedge funds and prominent investors are required to file by the SEC The 13F filings show the funds’ and investors’ portfolio positions as of March 31st, near the height of the coronavirus market crash. In this article, we look at what those funds think of Americas Gold and Silver Corporation (NYSE:USAS) based on that data.

Is Americas Gold and Silver Corporation (NYSE:USAS) a buy, sell, or hold? Hedge funds are taking an optimistic view. The number of long hedge fund bets moved up by 3 lately. Our calculations also showed that USAS isn’t among the 30 most popular stocks among hedge funds (click for Q1 rankings and see the video for a quick look at the top 5 stocks). USAS was in 8 hedge funds’ portfolios at the end of the first quarter of 2020. There were 5 hedge funds in our database with USAS positions at the end of the previous quarter. 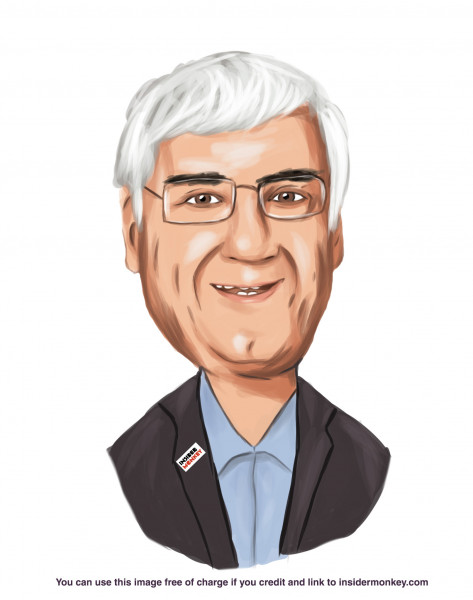 At Insider Monkey we leave no stone unturned when looking for the next great investment idea. For example, We take a look at lists like the 10 most profitable companies in the world to identify the compounders that are likely to deliver double digit returns. We interview hedge fund managers and ask them about their best ideas. We read hedge fund investor letters and listen to stock pitches at hedge fund conferences. For example we are checking out stocks recommended/scorned by legendary Bill Miller. Our best call in 2020 was shorting the market when the S&P 500 was trading at 3150 in February after realizing the coronavirus pandemic’s significance before most investors. Keeping this in mind let’s take a look at the fresh hedge fund action surrounding Americas Gold and Silver Corporation (NYSE:USAS).

At Q1’s end, a total of 8 of the hedge funds tracked by Insider Monkey were long this stock, a change of 60% from the fourth quarter of 2019. On the other hand, there were a total of 1 hedge funds with a bullish position in USAS a year ago. With the smart money’s sentiment swirling, there exists an “upper tier” of noteworthy hedge fund managers who were upping their holdings considerably (or already accumulated large positions). 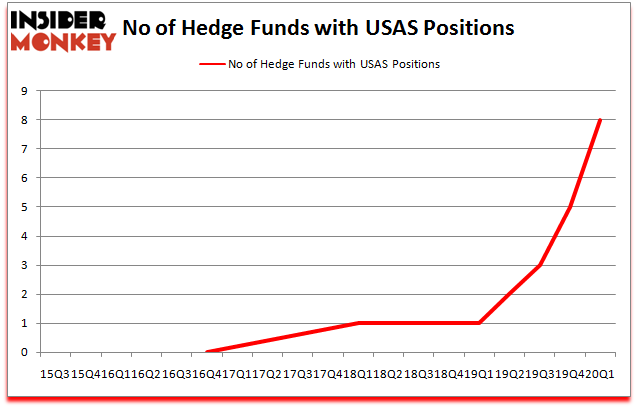 More specifically, Sprott Asset Management was the largest shareholder of Americas Gold and Silver Corporation (NYSE:USAS), with a stake worth $2.1 million reported as of the end of September. Trailing Sprott Asset Management was CQS Cayman LP, which amassed a stake valued at $0.8 million. Renaissance Technologies, Two Sigma Advisors, and Diametric Capital were also very fond of the stock, becoming one of the largest hedge fund holders of the company. In terms of the portfolio weights assigned to each position Sprott Asset Management allocated the biggest weight to Americas Gold and Silver Corporation (NYSE:USAS), around 0.19% of its 13F portfolio. Diametric Capital is also relatively very bullish on the stock, designating 0.17 percent of its 13F equity portfolio to USAS.

Consequently, some big names were breaking ground themselves. Renaissance Technologies, initiated the most valuable position in Americas Gold and Silver Corporation (NYSE:USAS). Renaissance Technologies had $0.7 million invested in the company at the end of the quarter. Nick Thakore’s Diametric Capital also initiated a $0.1 million position during the quarter. The only other fund with a new position in the stock is Gavin Saitowitz and Cisco J. del Valle’s Springbok Capital.

As you can see these stocks had an average of 5.25 hedge funds with bullish positions and the average amount invested in these stocks was $37 million. That figure was $4 million in USAS’s case. Protara Therapeutics, Inc. (NASDAQ:TARA) is the most popular stock in this table. On the other hand Sify Technologies Limited (NASDAQ:SIFY) is the least popular one with only 1 bullish hedge fund positions. Americas Gold and Silver Corporation (NYSE:USAS) is not the most popular stock in this group but hedge fund interest is still above average. Our calculations showed that top 10 most popular stocks among hedge funds returned 41.4% in 2019 and outperformed the S&P 500 ETF (SPY) by 10.1 percentage points. These stocks gained 12.2% in 2020 through June 17th but still beat the market by 14.8 percentage points. Hedge funds were also right about betting on USAS as the stock returned 50% in Q2 (through June 17th) and outperformed the market. Hedge funds were rewarded for their relative bullishness.