Hedge Funds Have Never Been This Bullish On Acacia Communications, Inc. (ACIA)

The market has been volatile in the last 6 months as the Federal Reserve continued its rate hikes and then abruptly reversed its stance and uncertainty looms over trade negotiations with China. Small cap stocks have been hit hard as a result, as the Russell 2000 ETF (IWM) has underperformed the larger S&P 500 ETF (SPY) by nearly 9 percentage points. SEC filings and hedge fund investor letters indicate that the smart money seems to be paring back their overall long exposure since summer months, though some funds increased their exposure dramatically at the end of Q4 and the beginning of Q1. In this article, we analyze what the smart money thinks of Acacia Communications, Inc. (NASDAQ:ACIA) and find out how it is affected by hedge funds’ moves.

Acacia Communications, Inc. (NASDAQ:ACIA) shareholders have witnessed an increase in hedge fund interest in recent months. ACIA was in 31 hedge funds’ portfolios at the end of March. There were 20 hedge funds in our database with ACIA holdings at the end of the previous quarter. Our calculations also showed that acia isn’t among the 30 most popular stocks among hedge funds.

In today’s marketplace there are a lot of metrics stock traders put to use to grade stocks. Some of the most useful metrics are hedge fund and insider trading signals. Our experts have shown that, historically, those who follow the best picks of the elite fund managers can outclass the S&P 500 by a superb amount (see the details here). 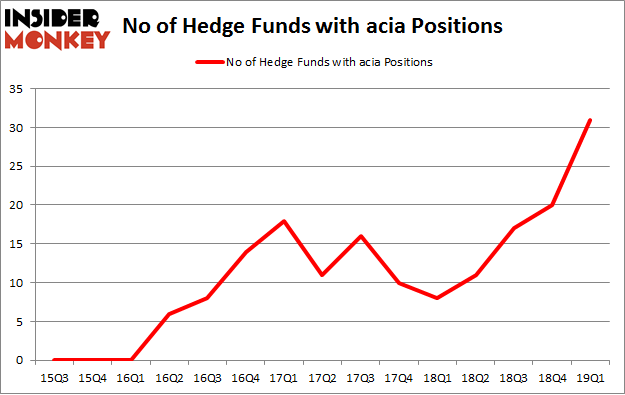 The largest stake in Acacia Communications, Inc. (NASDAQ:ACIA) was held by D E Shaw, which reported holding $90.7 million worth of stock at the end of March. It was followed by Renaissance Technologies with a $50.2 million position. Other investors bullish on the company included Millennium Management, Citadel Investment Group, and Tairen Capital.

With a general bullishness amongst the heavyweights, specific money managers were breaking ground themselves. Tairen Capital, managed by Larry Chen and Terry Zhang, created the biggest position in Acacia Communications, Inc. (NASDAQ:ACIA). Tairen Capital had $22.8 million invested in the company at the end of the quarter. Peter Rathjens, Bruce Clarke and John Campbell’s Arrowstreet Capital also made a $8.9 million investment in the stock during the quarter. The other funds with brand new ACIA positions are Steve Cohen’s Point72 Asset Management, Frank Slattery’s Symmetry Peak Management, and Charles Davidson and Joseph Jacobs’s Wexford Capital.

As you can see these stocks had an average of 16 hedge funds with bullish positions and the average amount invested in these stocks was $393 million. That figure was $320 million in ACIA’s case. Welbilt, Inc. (NYSE:WBT) is the most popular stock in this table. On the other hand Industrias Bachoco, S.A.B. de C.V. (NYSE:IBA) is the least popular one with only 3 bullish hedge fund positions. Compared to these stocks Acacia Communications, Inc. (NASDAQ:ACIA) is more popular among hedge funds. Our calculations showed that top 20 most popular stocks among hedge funds returned 1.9% in Q2 through May 30th and outperformed the S&P 500 ETF (SPY) by more than 3 percentage points. Unfortunately ACIA wasn’t nearly as popular as these 20 stocks and hedge funds that were betting on ACIA were disappointed as the stock returned -15.9% during the same period and underperformed the market. If you are interested in investing in large cap stocks with huge upside potential, you should check out the top 20 most popular stocks among hedge funds as 13 of these stocks already outperformed the market in Q2.