Investing in small cap stocks has historically been a way to outperform the market, as small cap companies typically grow faster on average than the blue chips. That outperformance comes with a price, however, as there are occasional periods of higher volatility. The last 8 months is one of those periods, as the Russell 2000 ETF (IWM) has underperformed the larger S&P 500 ETF (SPY) by nearly 9 percentage points. Given that the funds we track tend to have a disproportionate amount of their portfolios in smaller cap stocks, they have seen some volatility in their portfolios too. Actually their moves are potentially one of the factors that contributed to this volatility. In this article, we use our extensive database of hedge fund holdings to find out what the smart money thinks of Wright Medical Group N.V. (NASDAQ:WMGI).

Wright Medical Group N.V. (NASDAQ:WMGI) has seen an increase in activity from the world’s largest hedge funds in recent months. Our calculations also showed that WMGI isn’t among the 30 most popular stocks among hedge funds.

What does the smart money think about Wright Medical Group N.V. (NASDAQ:WMGI)? 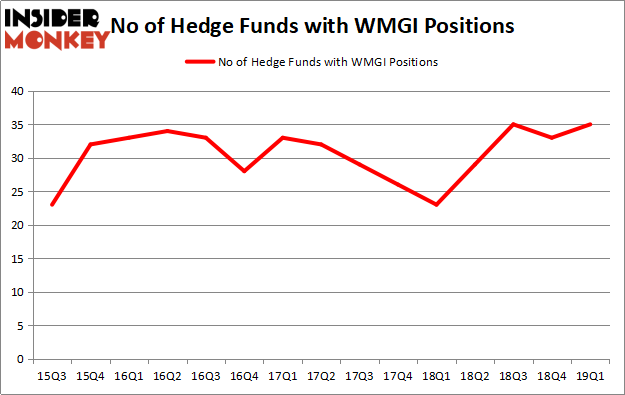 When looking at the institutional investors followed by Insider Monkey, Samuel Isaly’s OrbiMed Advisors has the biggest position in Wright Medical Group N.V. (NASDAQ:WMGI), worth close to $131.7 million, corresponding to 2% of its total 13F portfolio. Sitting at the No. 2 spot is Millennium Management, led by Israel Englander, holding a $102.1 million position; the fund has 0.2% of its 13F portfolio invested in the stock. Remaining members of the smart money that are bullish consist of Jeremy Green’s Redmile Group, William Leland Edwards’s Palo Alto Investors and Ken Fisher’s Fisher Asset Management.