What have hedge funds been doing with Trueblue Inc (NYSE:TBI)?

Heading into the second quarter of 2019, a total of 17 of the hedge funds tracked by Insider Monkey were bullish on this stock, a change of 13% from the previous quarter. On the other hand, there were a total of 16 hedge funds with a bullish position in TBI a year ago. With hedge funds’ positions undergoing their usual ebb and flow, there exists a few notable hedge fund managers who were adding to their holdings meaningfully (or already accumulated large positions). 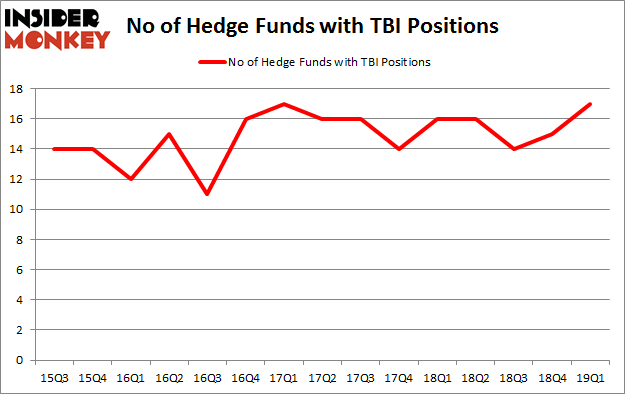 More specifically, GMT Capital was the largest shareholder of Trueblue Inc (NYSE:TBI), with a stake worth $45.5 million reported as of the end of March. Trailing GMT Capital was AQR Capital Management, which amassed a stake valued at $10.3 million. D E Shaw, Royce & Associates, and Arrowstreet Capital were also very fond of the stock, giving the stock large weights in their portfolios.

As one would reasonably expect, key money managers were leading the bulls’ herd. Arrowstreet Capital, managed by Peter Rathjens, Bruce Clarke and John Campbell, created the most outsized position in Trueblue Inc (NYSE:TBI). Arrowstreet Capital had $2.7 million invested in the company at the end of the quarter. Benjamin A. Smith’s Laurion Capital Management also made a $0.4 million investment in the stock during the quarter. The other funds with brand new TBI positions are Jeffrey Talpins’s Element Capital Management and Joel Greenblatt’s Gotham Asset Management.

As you can see these stocks had an average of 21 hedge funds with bullish positions and the average amount invested in these stocks was $174 million. That figure was $78 million in TBI’s case. Coherus Biosciences Inc (NASDAQ:CHRS) is the most popular stock in this table. On the other hand Lantheus Holdings Inc (NASDAQ:LNTH) is the least popular one with only 18 bullish hedge fund positions. Compared to these stocks Trueblue Inc (NYSE:TBI) is even less popular than LNTH. Hedge funds dodged a bullet by taking a bearish stance towards TBI. Our calculations showed that the top 20 most popular hedge fund stocks returned 6.2% in Q2 through June 19th and outperformed the S&P 500 ETF (SPY) by nearly 3 percentage points. Unfortunately TBI wasn’t nearly as popular as these 20 stocks (hedge fund sentiment was very bearish); TBI investors were disappointed as the stock returned -7.6% during the same time frame and underperformed the market. If you are interested in investing in large cap stocks with huge upside potential, you should check out the top 20 most popular stocks among hedge funds as 13 of these stocks already outperformed the market so far in the second quarter.