Tootsie Roll Industries, Inc. (NYSE:TR) has experienced an increase in support from the world’s most elite money managers lately. Our calculations also showed that TR isn’t among the 30 most popular stocks among hedge funds.

To most shareholders, hedge funds are viewed as worthless, outdated financial vehicles of the past. While there are over 8000 funds trading at the moment, Our researchers look at the masters of this group, about 750 funds. Most estimates calculate that this group of people control bulk of all hedge funds’ total asset base, and by following their matchless investments, Insider Monkey has come up with a number of investment strategies that have historically outpaced the market. Insider Monkey’s flagship hedge fund strategy outperformed the S&P 500 index by around 5 percentage points annually since its inception in May 2014 through June 18th. We were able to generate large returns even by identifying short candidates. Our portfolio of short stocks lost 28.2% since February 2017 (through June 18th) even though the market was up nearly 30% during the same period. We just shared a list of 5 short targets in our latest quarterly update and they are already down an average of 8.2% in a month whereas our long picks outperformed the market by 2.5 percentage points in this volatile 5 week period (our long picks also beat the market by 15 percentage points so far this year).

Heading into the second quarter of 2019, a total of 16 of the hedge funds tracked by Insider Monkey were long this stock, a change of 45% from one quarter earlier. The graph below displays the number of hedge funds with bullish position in TR over the last 15 quarters. With hedgies’ capital changing hands, there exists a few key hedge fund managers who were increasing their stakes meaningfully (or already accumulated large positions). 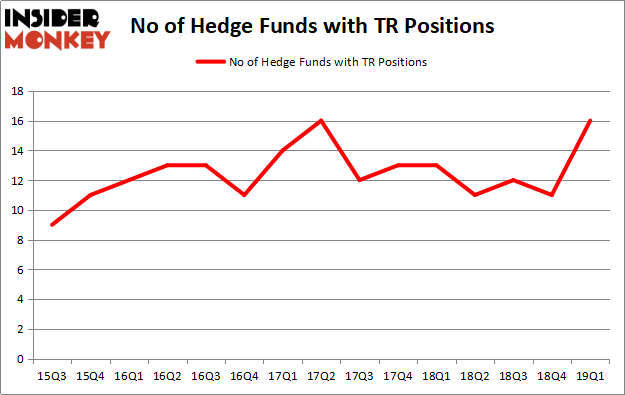 According to publicly available hedge fund and institutional investor holdings data compiled by Insider Monkey, Mario Gabelli’s GAMCO Investors has the number one position in Tootsie Roll Industries, Inc. (NYSE:TR), worth close to $36.6 million, accounting for 0.3% of its total 13F portfolio. The second largest stake is held by Chuck Royce of Royce & Associates, with a $31.7 million position; the fund has 0.3% of its 13F portfolio invested in the stock. Remaining members of the smart money that hold long positions encompass Jim Simons’s Renaissance Technologies, John D. Gillespie’s Prospector Partners and Scott Wallace’s Wallace Capital Management.

With a general bullishness amongst the heavyweights, key money managers have been driving this bullishness. Citadel Investment Group, managed by Ken Griffin, initiated the most outsized position in Tootsie Roll Industries, Inc. (NYSE:TR). Citadel Investment Group had $0.9 million invested in the company at the end of the quarter. Mike Vranos’s Ellington also made a $0.6 million investment in the stock during the quarter. The following funds were also among the new TR investors: Joel Greenblatt’s Gotham Asset Management, Noam Gottesman’s GLG Partners, and David Harding’s Winton Capital Management.

As you can see these stocks had an average of 16.5 hedge funds with bullish positions and the average amount invested in these stocks was $65 million. That figure was $94 million in TR’s case. Diamond Offshore Drilling Inc (NYSE:DO) is the most popular stock in this table. On the other hand Horace Mann Educators Corporation (NYSE:HMN) is the least popular one with only 14 bullish hedge fund positions. Tootsie Roll Industries, Inc. (NYSE:TR) is not the least popular stock in this group but hedge fund interest is still below average. This is a slightly negative signal and we’d rather spend our time researching stocks that hedge funds are piling on. Our calculations showed that top 20 most popular stocks among hedge funds returned 6.2% in Q2 through June 19th and outperformed the S&P 500 ETF (SPY) by nearly 3 percentage points. Unfortunately TR wasn’t nearly as popular as these 20 stocks (hedge fund sentiment was quite bearish); TR investors were disappointed as the stock returned 2.4% during the same time period and underperformed the market. If you are interested in investing in large cap stocks with huge upside potential, you should check out the top 20 most popular stocks among hedge funds as 13 of these stocks already outperformed the market so far in Q2.