Is TIM Participacoes SA (NYSE:TSU) a good place to invest some of your money right now? We can gain invaluable insight to help us answer that question by studying the investment trends of top investors, who employ world-class Ivy League graduates, who are given immense resources and industry contacts to put their financial expertise to work. The top picks of these firms have historically outperformed the market when we account for known risk factors, making them very valuable investment ideas.

TIM Participacoes SA (NYSE:TSU) was in 16 hedge funds’ portfolios at the end of March. TSU has experienced an increase in activity from the world’s largest hedge funds in recent months. There were 14 hedge funds in our database with TSU positions at the end of the previous quarter. Our calculations also showed that tsu isn’t among the 30 most popular stocks among hedge funds. 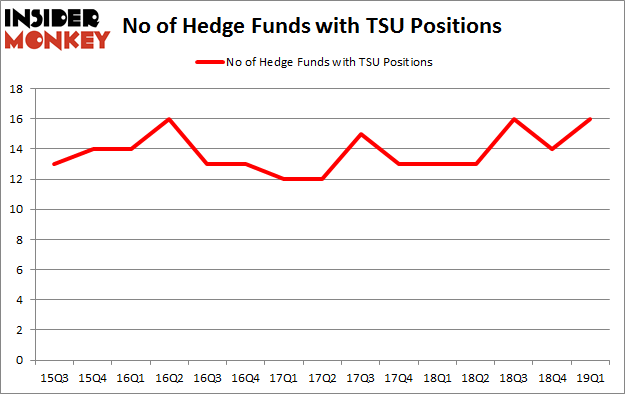 Among these funds, AQR Capital Management held the most valuable stake in TIM Participacoes SA (NYSE:TSU), which was worth $113 million at the end of the first quarter. On the second spot was Paulson & Co which amassed $75.4 million worth of shares. Moreover, Renaissance Technologies, GoldenTree Asset Management, and Citadel Investment Group were also bullish on TIM Participacoes SA (NYSE:TSU), allocating a large percentage of their portfolios to this stock.

Now, key money managers have been driving this bullishness. D E Shaw, managed by D. E. Shaw, established the most valuable position in TIM Participacoes SA (NYSE:TSU). D E Shaw had $2.8 million invested in the company at the end of the quarter. Benjamin A. Smith’s Laurion Capital Management also initiated a $1.5 million position during the quarter. The only other fund with a brand new TSU position is Roy Vermus and Shlomi Bracha’s Noked Capital.

As you can see these stocks had an average of 29 hedge funds with bullish positions and the average amount invested in these stocks was $774 million. That figure was $342 million in TSU’s case. Voya Financial Inc (NYSE:VOYA) is the most popular stock in this table. On the other hand AMERCO (NASDAQ:UHAL) is the least popular one with only 12 bullish hedge fund positions. TIM Participacoes SA (NYSE:TSU) is not the least popular stock in this group but hedge fund interest is still below average. This is a slightly negative signal and we’d rather spend our time researching stocks that hedge funds are piling on. Our calculations showed that top 20 most popular stocks among hedge funds returned 6.2% in Q2 through June 19th and outperformed the S&P 500 ETF (SPY) by nearly 3 percentage points. Unfortunately TSU wasn’t nearly as popular as these 20 stocks (hedge fund sentiment was quite bearish); TSU investors were disappointed as the stock returned -1.2% during the same time period and underperformed the market. If you are interested in investing in large cap stocks with huge upside potential, you should check out the top 20 most popular stocks among hedge funds as 13 of these stocks already outperformed the market so far in Q2.