We know that hedge funds generate strong, risk-adjusted returns over the long run, therefore imitating the picks that they are collectively bullish on can be a profitable strategy for retail investors. With billions of dollars in assets, smart money investors have to conduct complex analyses, spend many resources and use tools that are not always available for the general crowd. This doesn’t mean that they don’t have occasional colossal losses; they do (like Peltz’s recent General Electric losses). However, it is still a good idea to keep an eye on hedge fund activity. With this in mind, as the current round of 13F filings has just ended, let’s examine the smart money sentiment towards TechTarget Inc (NASDAQ:TTGT).

Is TechTarget Inc (NASDAQ:TTGT) a buy here? Investors who are in the know are becoming more confident. The number of long hedge fund positions improved by 1 lately. Our calculations also showed that ttgt isn’t among the 30 most popular stocks among hedge funds.

At the moment there are plenty of tools shareholders employ to evaluate stocks. A pair of the less utilized tools are hedge fund and insider trading interest. We have shown that, historically, those who follow the top picks of the best investment managers can beat the S&P 500 by a solid margin (see the details here).

What does smart money think about TechTarget Inc (NASDAQ:TTGT)? 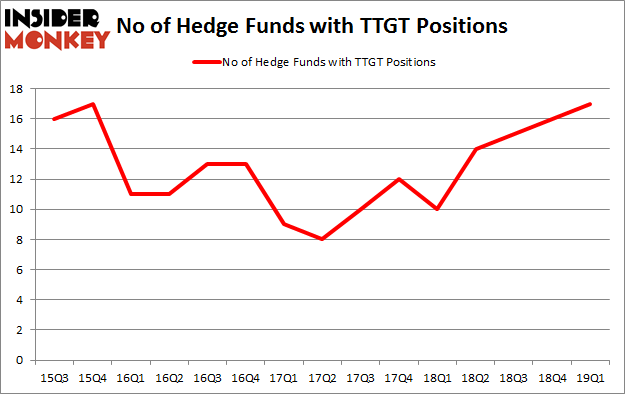 More specifically, Nine Ten Partners was the largest shareholder of TechTarget Inc (NASDAQ:TTGT), with a stake worth $27.8 million reported as of the end of March. Trailing Nine Ten Partners was Portolan Capital Management, which amassed a stake valued at $13.6 million. Renaissance Technologies, Marshall Wace LLP, and Two Sigma Advisors were also very fond of the stock, giving the stock large weights in their portfolios.

As you can see these stocks had an average of 10 hedge funds with bullish positions and the average amount invested in these stocks was $36 million. That figure was $83 million in TTGT’s case. Control4 Corp (NASDAQ:CTRL) is the most popular stock in this table. On the other hand Hi-Crush Partners LP (NYSE:HCLP) is the least popular one with only 4 bullish hedge fund positions. TechTarget Inc (NASDAQ:TTGT) is not the most popular stock in this group but hedge fund interest is still above average. Our calculations showed that top 20 most popular stocks among hedge funds returned 6.2% in Q2 through June 19th and outperformed the S&P 500 ETF (SPY) by nearly 3 percentage points. Hedge funds were also right about betting on TTGT as the stock returned 30.1% during the same period and outperformed the market by an even larger margin. Hedge funds were rewarded for their relative bullishness.