The government requires hedge funds and wealthy investors that crossed the $100 million equity holdings threshold are required to file a report that shows their positions at the end of every quarter. Even though it isn’t the intention, these filings level the playing field for ordinary investors. The latest round of 13F filings disclosed the funds’ positions on March 31. We at Insider Monkey have made an extensive database of nearly 750 of those elite funds and famous investors’ filings. In this article, we analyze how these elite funds and prominent investors traded Simpson Manufacturing Co, Inc. (NYSE:SSD) based on those filings.

Simpson Manufacturing Co, Inc. (NYSE:SSD) has experienced an increase in hedge fund interest of late. SSD was in 19 hedge funds’ portfolios at the end of March. There were 17 hedge funds in our database with SSD holdings at the end of the previous quarter. Our calculations also showed that ssd isn’t among the 30 most popular stocks among hedge funds.

In the financial world there are many signals shareholders use to grade publicly traded companies. A duo of the less known signals are hedge fund and insider trading moves. Our researchers have shown that, historically, those who follow the top picks of the best investment managers can trounce the broader indices by a solid amount (see the details here). 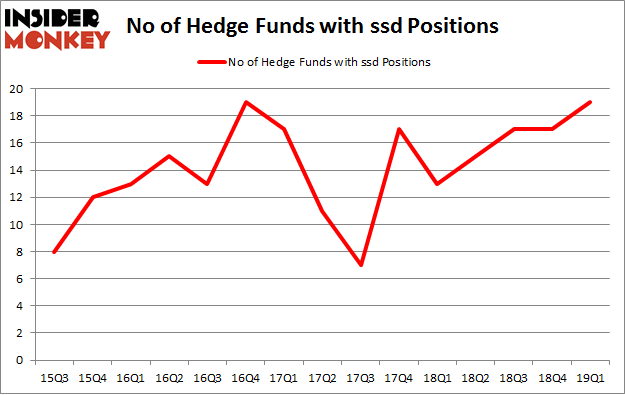 The largest stake in Simpson Manufacturing Co, Inc. (NYSE:SSD) was held by Ariel Investments, which reported holding $108.1 million worth of stock at the end of March. It was followed by Royce & Associates with a $47.7 million position. Other investors bullish on the company included Arrowstreet Capital, Millennium Management, and Renaissance Technologies.

With a general bullishness amongst the heavyweights, specific money managers have been driving this bullishness. Arrowstreet Capital, managed by Peter Rathjens, Bruce Clarke and John Campbell, created the most outsized position in Simpson Manufacturing Co, Inc. (NYSE:SSD). Arrowstreet Capital had $10.8 million invested in the company at the end of the quarter. Paul Marshall and Ian Wace’s Marshall Wace LLP also made a $1.2 million investment in the stock during the quarter. The other funds with new positions in the stock are John Hempton’s Bronte Capital, Benjamin A. Smith’s Laurion Capital Management, and Jeffrey Talpins’s Element Capital Management.

As you can see these stocks had an average of 18 hedge funds with bullish positions and the average amount invested in these stocks was $197 million. That figure was $199 million in SSD’s case. Cactus, Inc. (NYSE:WHD) is the most popular stock in this table. On the other hand Quaker Chemical Corp (NYSE:KWR) is the least popular one with only 11 bullish hedge fund positions. Simpson Manufacturing Co, Inc. (NYSE:SSD) is not the most popular stock in this group but hedge fund interest is still above average. Our calculations showed that top 20 most popular stocks among hedge funds returned 1.9% in Q2 through May 30th and outperformed the S&P 500 ETF (SPY) by more than 3 percentage points. Hedge funds were also right about betting on SSD as the stock returned 4.3% during the same period and outperformed the market by an even larger margin. Hedge funds were rewarded for their relative bullishness.