Hedge funds and large money managers usually invest with a focus on the long-term horizon and, therefore, short-lived dips or bumps on the charts, usually don’t make them change their opinion towards a company. This time it may be different. During the fourth quarter of 2018 we observed increased volatility and a 20% drop in stock prices. Things completely reversed in 2019 and stock indices hit record highs. Recent hedge fund investor letters indicated that they are cutting their overall exposure, closing out some position and doubling down on others. Let’s take a look at the hedge fund sentiment towards Seelos Therapeutics, Inc. (NASDAQ:SEEL) to find out whether it was one of their high conviction long-term ideas.

Hedge fund interest in Seelos Therapeutics, Inc. (NASDAQ:SEEL) shares was flat at the end of last quarter. This is usually a negative indicator. At the end of this article we will also compare SEEL to other stocks including DiaMedica Therapeutics Inc. (NASDAQ:DMAC), Verb Technology Company, Inc. (NASDAQ:VERB), and Trinity Biotech plc (NASDAQ:TRIB) to get a better sense of its popularity.

According to most shareholders, hedge funds are viewed as underperforming, outdated financial vehicles of the past. While there are more than 8000 funds with their doors open at the moment, Our researchers hone in on the bigwigs of this group, approximately 750 funds. It is estimated that this group of investors oversee the majority of the smart money’s total capital, and by following their best stock picks, Insider Monkey has brought to light a number of investment strategies that have historically outperformed the S&P 500 index. Insider Monkey’s flagship short hedge fund strategy exceeded the S&P 500 short ETFs by around 20 percentage points annually since its inception in May 2014. Our portfolio of short stocks lost 27.8% since February 2017 (through November 21st) even though the market was up more than 39% during the same period. We just shared a list of 7 short targets in our latest quarterly update .

Unlike the largest US hedge funds that are convinced Dow will soar past 40,000 or the world’s most bearish hedge fund that’s more convinced than ever that a crash is coming, our long-short investment strategy doesn’t rely on bull or bear markets to deliver double digit returns. We only rely on the best performing hedge funds‘ buy/sell signals. Let’s take a gander at the latest hedge fund action encompassing Seelos Therapeutics, Inc. (NASDAQ:SEEL).

What have hedge funds been doing with Seelos Therapeutics, Inc. (NASDAQ:SEEL)?

At Q3’s end, a total of 3 of the hedge funds tracked by Insider Monkey were bullish on this stock, a change of 0% from one quarter earlier. The graph below displays the number of hedge funds with bullish position in SEEL over the last 17 quarters. With hedgies’ capital changing hands, there exists a few key hedge fund managers who were adding to their stakes considerably (or already accumulated large positions). 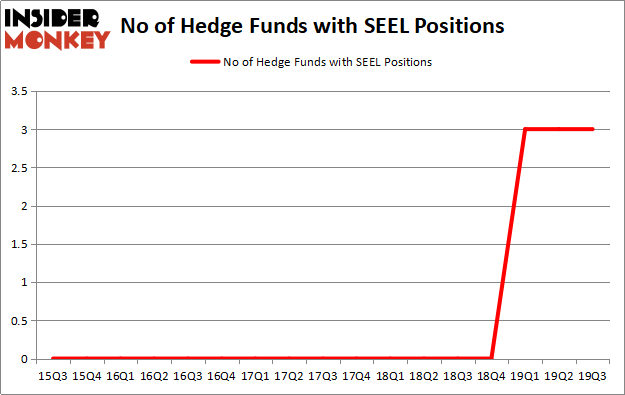 When looking at the institutional investors followed by Insider Monkey, Renaissance Technologies holds the biggest position in Seelos Therapeutics, Inc. (NASDAQ:SEEL). Renaissance Technologies has a $0.9 million position in the stock, comprising less than 0.1%% of its 13F portfolio. Sitting at the No. 2 spot is Sabby Capital, managed by Hal Mintz, which holds a $0.5 million position; the fund has 0.2% of its 13F portfolio invested in the stock. In terms of the portfolio weights assigned to each position Sabby Capital allocated the biggest weight to Seelos Therapeutics, Inc. (NASDAQ:SEEL), around 0.24% of its portfolio. Ardsley Partners is also relatively very bullish on the stock, designating 0.01 percent of its 13F equity portfolio to SEEL.

We view hedge fund activity in the stock unfavorable, but in this case there was only a single hedge fund selling its entire position: Citadel Investment Group. One hedge fund selling its entire position doesn’t always imply a bearish intent. Theoretically a hedge fund may decide to sell a promising position in order to invest the proceeds in a more promising idea. However, we don’t think this is the case in this case because only one of the 800+ hedge funds tracked by Insider Monkey identified as a viable investment and initiated a position in the stock (that fund was Sabby Capital).

As you can see these stocks had an average of 4.5 hedge funds with bullish positions and the average amount invested in these stocks was $1 million. That figure was $1 million in SEEL’s case. Estre Ambiental, Inc. (NASDAQ:ESTR) is the most popular stock in this table. On the other hand DiaMedica Therapeutics Inc. (NASDAQ:DMAC) is the least popular one with only 4 bullish hedge fund positions. Compared to these stocks Seelos Therapeutics, Inc. (NASDAQ:SEEL) is even less popular than DMAC. Hedge funds dodged a bullet by taking a bearish stance towards SEEL. Our calculations showed that the top 20 most popular hedge fund stocks returned 34.7% in 2019 through November 22nd and outperformed the S&P 500 ETF (SPY) by 8.5 percentage points. Unfortunately SEEL wasn’t nearly as popular as these 20 stocks (hedge fund sentiment was very bearish); SEEL investors were disappointed as the stock returned -8.7% during the fourth quarter (through 11/22) and underperformed the market. If you are interested in investing in large cap stocks with huge upside potential, you should check out the top 20 most popular stocks among hedge funds as 70 percent of these stocks already outperformed the market so far in Q4.