Our extensive research has shown that imitating the smart money can generate significant returns for retail investors, which is why we track nearly 750 active prominent money managers and analyze their quarterly 13F filings. The stocks that are heavily bought by hedge funds historically outperformed the market, though there is no shortage of high profile failures like hedge funds’ 2018 losses in Facebook and Apple. Let’s take a closer look at what the funds we track think about Portland General Electric Company (NYSE:POR) in this article.

Portland General Electric Company (NYSE:POR) shares haven’t seen a lot of action during the first quarter. Overall, hedge fund sentiment was unchanged. The stock was in 19 hedge funds’ portfolios at the end of the first quarter of 2019. The level and the change in hedge fund popularity aren’t the only variables you need to analyze to decipher hedge funds’ perspectives. A stock may witness a boost in popularity but it may still be less popular than similarly priced stocks. That’s why at the end of this article we will examine companies such as The Hanover Insurance Group, Inc. (NYSE:THG), AECOM (NYSE:ACM), and Healthequity Inc (NASDAQ:HQY) to gather more data points.

At the moment there are tons of gauges market participants can use to assess their stock investments. A couple of the most useful gauges are hedge fund and insider trading indicators. Our researchers have shown that, historically, those who follow the top picks of the elite investment managers can beat their index-focused peers by a healthy amount (see the details here).

At Q1’s end, a total of 19 of the hedge funds tracked by Insider Monkey were bullish on this stock, a change of 0% from the previous quarter. The graph below displays the number of hedge funds with bullish position in POR over the last 15 quarters. With the smart money’s positions undergoing their usual ebb and flow, there exists a few noteworthy hedge fund managers who were increasing their holdings considerably (or already accumulated large positions). 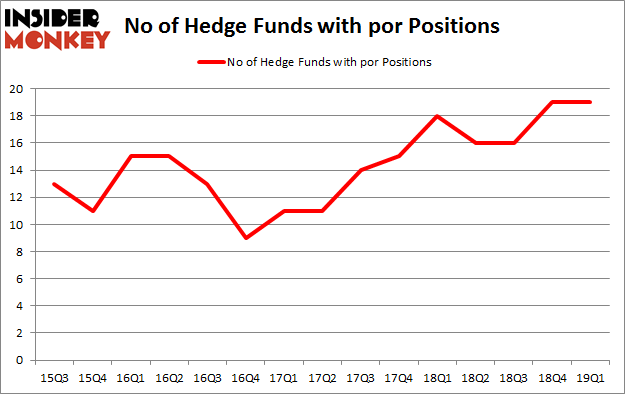 When looking at the institutional investors followed by Insider Monkey, Jim Simons’s Renaissance Technologies has the largest position in Portland General Electric Company (NYSE:POR), worth close to $118.8 million, amounting to 0.1% of its total 13F portfolio. The second largest stake is held by GLG Partners, led by Noam Gottesman, holding a $29.3 million position; 0.1% of its 13F portfolio is allocated to the stock. Other peers that are bullish comprise Israel Englander’s Millennium Management, D. E. Shaw’s D E Shaw and Michael Gelband’s ExodusPoint Capital.

Since Portland General Electric Company (NYSE:POR) has experienced declining sentiment from the entirety of the hedge funds we track, logic holds that there exists a select few funds who sold off their full holdings by the end of the third quarter. It’s worth mentioning that Brian Olson, Baehyun Sung, and Jamie Waters’s Blackstart Capital sold off the biggest investment of the “upper crust” of funds monitored by Insider Monkey, totaling about $15.6 million in call options, and Matthew Hulsizer’s PEAK6 Capital Management was right behind this move, as the fund said goodbye to about $1.9 million worth. These bearish behaviors are intriguing to say the least, as total hedge fund interest stayed the same (this is a bearish signal in our experience).

As you can see these stocks had an average of 18.25 hedge funds with bullish positions and the average amount invested in these stocks was $239 million. That figure was $252 million in POR’s case. The Hanover Insurance Group, Inc. (NYSE:THG) is the most popular stock in this table. On the other hand TFS Financial Corporation (NASDAQ:TFSL) is the least popular one with only 7 bullish hedge fund positions. Portland General Electric Company (NYSE:POR) is not the most popular stock in this group but hedge fund interest is still above average. Our calculations showed that top 20 most popular stocks among hedge funds returned 1.9% in Q2 through May 30th and outperformed the S&P 500 ETF (SPY) by more than 3 percentage points. Hedge funds were also right about betting on POR, though not to the same extent, as the stock returned 0.4% during the same time frame and outperformed the market as well.