The elite funds run by legendary investors such as David Tepper and Dan Loeb make hundreds of millions of dollars for themselves and their investors by spending enormous resources doing research on small cap stocks that big investment banks don’t follow. Because of their pay structures, they have strong incentives to do the research necessary to beat the market. That’s why we pay close attention to what they think in small cap stocks. In this article, we take a closer look at LF Capital Acquisition Corp. (NASDAQ:LFAC) from the perspective of those elite funds.

LF Capital Acquisition Corp. (NASDAQ:LFAC) shares haven’t seen a lot of action during the first quarter. Overall, hedge fund sentiment was unchanged. The stock was in 10 hedge funds’ portfolios at the end of March. At the end of this article we will also compare LFAC to other stocks including Adamas Pharmaceuticals Inc (NASDAQ:ADMS), Nuvectra Corporation (NASDAQ:NVTR), and Millendo Therapeutics, Inc. (NASDAQ:MLND) to get a better sense of its popularity.

In today’s marketplace there are numerous gauges stock market investors can use to size up stocks. A duo of the most useful gauges are hedge fund and insider trading activity. We have shown that, historically, those who follow the best picks of the best investment managers can trounce their index-focused peers by a solid amount (see the details here).

How have hedgies been trading LF Capital Acquisition Corp. (NASDAQ:LFAC)? 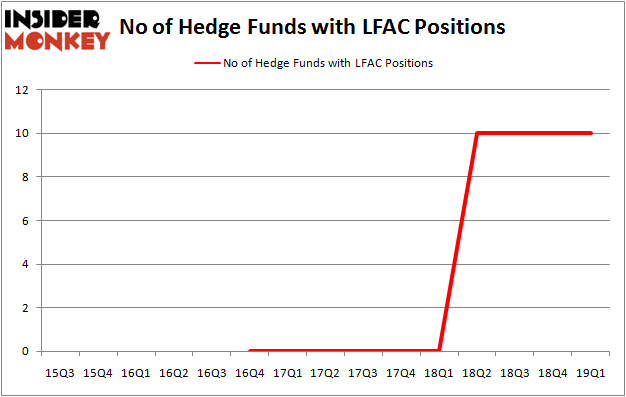 Of the funds tracked by Insider Monkey, Richard Rubin’s Hawkeye Capital has the number one position in LF Capital Acquisition Corp. (NASDAQ:LFAC), worth close to $11.1 million, amounting to 16.5% of its total 13F portfolio. Coming in second is Glazer Capital, led by Paul Glazer, holding a $8.6 million position; 1.3% of its 13F portfolio is allocated to the stock. Other peers with similar optimism contain Jeffrey Altman’s Owl Creek Asset Management, John Thiessen’s Vertex One Asset Management and Phillip Goldstein, Andrew Dakos and Steven Samuels’s Bulldog Investors.

We view hedge fund activity in the stock unfavorable, but in this case there was only a single hedge fund selling its entire position: Weiss Asset Management. One hedge fund selling its entire position doesn’t always imply a bearish intent. Theoretically a hedge fund may decide to sell a promising position in order to invest the proceeds in a more promising idea. However, we don’t think this is the case in this case because only one of the 800+ hedge funds tracked by Insider Monkey identified as a viable investment and initiated a position in the stock (that fund was Millennium Management).

As you can see these stocks had an average of 8.25 hedge funds with bullish positions and the average amount invested in these stocks was $34 million. That figure was $34 million in LFAC’s case. Nuvectra Corporation (NASDAQ:NVTR) is the most popular stock in this table. On the other hand American Realty Investors, Inc. (NYSE:ARL) is the least popular one with only 1 bullish hedge fund positions. LF Capital Acquisition Corp. (NASDAQ:LFAC) is not the most popular stock in this group but hedge fund interest is still above average. This is a slightly positive signal but we’d rather spend our time researching stocks that hedge funds are piling on. Our calculations showed that top 20 most popular stocks among hedge funds returned 6.2% in Q2 through June 19th and outperformed the S&P 500 ETF (SPY) by nearly 3 percentage points. Unfortunately LFAC wasn’t nearly as popular as these 20 stocks and hedge funds that were betting on LFAC were disappointed as the stock returned 0.8% during the same period and underperformed the market. If you are interested in investing in large cap stocks with huge upside potential, you should check out the top 20 most popular stocks among hedge funds as 13 of these stocks already outperformed the market so far in Q2.