Legendary investors such as Jeffrey Talpins and Seth Klarman earn enormous amounts of money for themselves and their investors by doing in-depth research on small-cap stocks that big brokerage houses don’t publish. Small cap stocks -especially when they are screened well- can generate substantial outperformance versus a boring index fund. That’s why we analyze the activity of those elite funds in these small-cap stocks. In the following paragraphs, we analyze Impinj, Inc. (NASDAQ:PI) from the perspective of those elite funds.

Impinj, Inc. (NASDAQ:PI) has seen an increase in hedge fund interest recently. Our calculations also showed that PI isn’t among the 30 most popular stocks among hedge funds.

What does smart money think about Impinj, Inc. (NASDAQ:PI)?

Heading into the second quarter of 2019, a total of 11 of the hedge funds tracked by Insider Monkey held long positions in this stock, a change of 57% from the fourth quarter of 2018. By comparison, 11 hedge funds held shares or bullish call options in PI a year ago. With the smart money’s positions undergoing their usual ebb and flow, there exists a select group of noteworthy hedge fund managers who were adding to their stakes significantly (or already accumulated large positions). 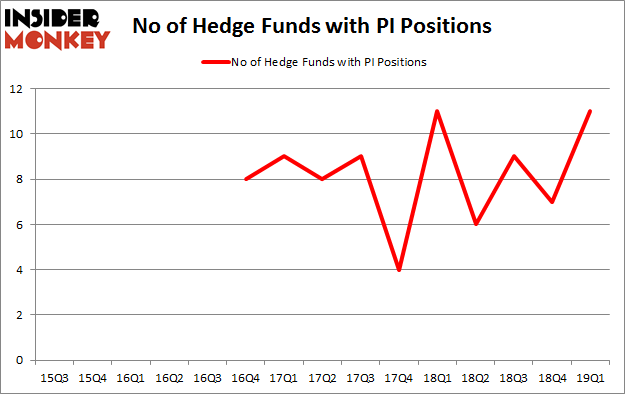 When looking at the institutional investors followed by Insider Monkey, Daniel Patrick Gibson’s Sylebra Capital Management has the most valuable position in Impinj, Inc. (NASDAQ:PI), worth close to $70.9 million, accounting for 4.2% of its total 13F portfolio. Coming in second is D E Shaw, led by D. E. Shaw, holding a $8.2 million position; less than 0.1%% of its 13F portfolio is allocated to the company. Remaining professional money managers that are bullish consist of Israel Englander’s Millennium Management, Ken Griffin’s Citadel Investment Group and Chet Kapoor’s Tenzing Global Investors.

As one would reasonably expect, some big names were breaking ground themselves. Tenzing Global Investors, managed by Chet Kapoor, assembled the largest position in Impinj, Inc. (NASDAQ:PI). Tenzing Global Investors had $1.7 million invested in the company at the end of the quarter. Josh Goldberg’s G2 Investment Partners Management also made a $0.5 million investment in the stock during the quarter. The following funds were also among the new PI investors: Peter Muller’s PDT Partners, Paul Tudor Jones’s Tudor Investment Corp, and Andrew Feldstein and Stephen Siderow’s Blue Mountain Capital.

As you can see these stocks had an average of 10.25 hedge funds with bullish positions and the average amount invested in these stocks was $62 million. That figure was $91 million in PI’s case. Titan International Inc (NYSE:TWI) is the most popular stock in this table. On the other hand Corindus Vascular Robotics Inc (NYSE:CVRS) is the least popular one with only 8 bullish hedge fund positions. Impinj, Inc. (NASDAQ:PI) is not the most popular stock in this group but hedge fund interest is still above average. Our calculations showed that top 20 most popular stocks among hedge funds returned 6.2% in Q2 through June 19th and outperformed the S&P 500 ETF (SPY) by nearly 3 percentage points. Hedge funds were also right about betting on PI as the stock returned 61.4% during the same period and outperformed the market by an even larger margin. Hedge funds were rewarded for their relative bullishness.