How do we determine whether El Pollo LoCo Holdings Inc (NASDAQ:LOCO) makes for a good investment at the moment? We analyze the sentiment of a select group of the very best investors in the world, who spend immense amounts of time and resources studying companies. They may not always be right (no one is), but data shows that their consensus long positions have historically outperformed the market when we adjust for known risk factors.

Hedge fund interest in El Pollo LoCo Holdings Inc (NASDAQ:LOCO) shares was flat at the end of last quarter. This is usually a negative indicator. At the end of this article we will also compare LOCO to other stocks including Triple-S Management Corp. (NYSE:GTS), REX American Resources Corp (NYSE:REX), and Ichor Holdings, Ltd. (NASDAQ:ICHR) to get a better sense of its popularity.

What have hedge funds been doing with El Pollo LoCo Holdings Inc (NASDAQ:LOCO)?

At Q1’s end, a total of 16 of the hedge funds tracked by Insider Monkey were long this stock, a change of 0% from the fourth quarter of 2018. The graph below displays the number of hedge funds with bullish position in LOCO over the last 15 quarters. With hedgies’ capital changing hands, there exists a select group of notable hedge fund managers who were boosting their stakes significantly (or already accumulated large positions). 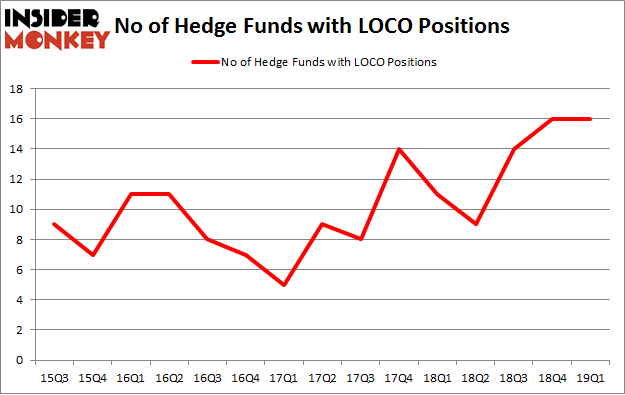 Among these funds, Royce & Associates held the most valuable stake in El Pollo LoCo Holdings Inc (NASDAQ:LOCO), which was worth $6.5 million at the end of the first quarter. On the second spot was Maverick Capital which amassed $4.9 million worth of shares. Moreover, Driehaus Capital, Two Sigma Advisors, and Renaissance Technologies were also bullish on El Pollo LoCo Holdings Inc (NASDAQ:LOCO), allocating a large percentage of their portfolios to this stock.

Since El Pollo LoCo Holdings Inc (NASDAQ:LOCO) has witnessed declining sentiment from hedge fund managers, we can see that there were a few hedgies that elected to cut their full holdings in the third quarter. Interestingly, David Harding’s Winton Capital Management sold off the largest investment of the “upper crust” of funds tracked by Insider Monkey, worth an estimated $4.3 million in stock, and David Costen Haley’s HBK Investments was right behind this move, as the fund dumped about $0.7 million worth. These moves are important to note, as aggregate hedge fund interest stayed the same (this is a bearish signal in our experience).

As you can see these stocks had an average of 12 hedge funds with bullish positions and the average amount invested in these stocks was $65 million. That figure was $27 million in LOCO’s case. Collegium Pharmaceutical Inc (NASDAQ:COLL) is the most popular stock in this table. On the other hand REX American Resources Corp (NYSE:REX) is the least popular one with only 6 bullish hedge fund positions. El Pollo LoCo Holdings Inc (NASDAQ:LOCO) is not the most popular stock in this group but hedge fund interest is still above average. This is a slightly positive signal but we’d rather spend our time researching stocks that hedge funds are piling on. Our calculations showed that top 20 most popular stocks among hedge funds returned 6.2% in Q2 through June 19th and outperformed the S&P 500 ETF (SPY) by nearly 3 percentage points. Unfortunately LOCO wasn’t nearly as popular as these 20 stocks and hedge funds that were betting on LOCO were disappointed as the stock returned -17.1% during the same period and underperformed the market. If you are interested in investing in large cap stocks with huge upside potential, you should check out the top 20 most popular stocks among hedge funds as 13 of these stocks already outperformed the market so far in Q2.