We at Insider Monkey have gone over 738 13F filings that hedge funds and famous value investors are required to file by the SEC. The 13F filings show the funds’ and investors’ portfolio positions as of March 31st. In this article we look at what those investors think of Clarus Corporation (NASDAQ:CLAR).

Clarus Corporation (NASDAQ:CLAR) shares haven’t seen a lot of action during the first quarter. Overall, hedge fund sentiment was unchanged. The stock was in 13 hedge funds’ portfolios at the end of the first quarter of 2019. The level and the change in hedge fund popularity aren’t the only variables you need to analyze to decipher hedge funds’ perspectives. A stock may witness a boost in popularity but it may still be less popular than similarly priced stocks. That’s why at the end of this article we will examine companies such as Gladstone Investment Corporation (NASDAQ:GAIN), MiX Telematics Limited (NYSE:MIXT), and Regalwood Global Energy Ltd. (NYSE:RWGE) to gather more data points. 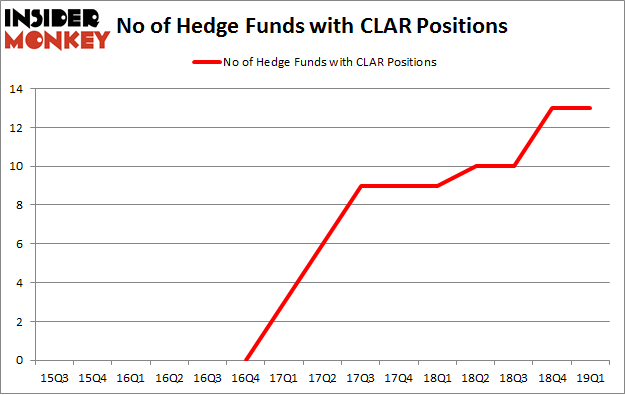 More specifically, Greenhouse Funds was the largest shareholder of Clarus Corporation (NASDAQ:CLAR), with a stake worth $26.9 million reported as of the end of March. Trailing Greenhouse Funds was Renaissance Technologies, which amassed a stake valued at $12.2 million. Wynnefield Capital, Arrowstreet Capital, and Royce & Associates were also very fond of the stock, giving the stock large weights in their portfolios.

Judging by the fact that Clarus Corporation (NASDAQ:CLAR) has experienced declining sentiment from the smart money, it’s easy to see that there was a specific group of funds who were dropping their positions entirely heading into Q3. It’s worth mentioning that Mark Broach’s Manatuck Hill Partners dumped the largest position of the “upper crust” of funds monitored by Insider Monkey, comprising close to $2.8 million in stock. Frederick DiSanto’s fund, Ancora Advisors, also said goodbye to its stock, about $1.3 million worth. These moves are intriguing to say the least, as aggregate hedge fund interest stayed the same (this is a bearish signal in our experience).

As you can see these stocks had an average of 10.25 hedge funds with bullish positions and the average amount invested in these stocks was $53 million. That figure was $55 million in CLAR’s case. Regalwood Global Energy Ltd. (NYSE:RWGE) is the most popular stock in this table. On the other hand Gladstone Investment Corporation (NASDAQ:GAIN) is the least popular one with only 7 bullish hedge fund positions. Clarus Corporation (NASDAQ:CLAR) is not the most popular stock in this group but hedge fund interest is still above average. Our calculations showed that top 20 most popular stocks among hedge funds returned 6.2% in Q2 through June 19th and outperformed the S&P 500 ETF (SPY) by nearly 3 percentage points. Hedge funds were also right about betting on CLAR as the stock returned 7.2% during the same period and outperformed the market by an even larger margin. Hedge funds were rewarded for their relative bullishness.