The 700+ hedge funds and famous money managers tracked by Insider Monkey have already compiled and submitted their 13F filings for the first quarter, which unveil their equity positions as of March 31. We went through these filings, fixed typos and other more significant errors and identified the changes in hedge fund portfolios. Our extensive review of these public filings is finally over, so this article is set to reveal the smart money sentiment towards Barrett Business Services, Inc. (NASDAQ:BBSI).

Hedge fund interest in Barrett Business Services, Inc. (NASDAQ:BBSI) shares was flat at the end of last quarter. This is usually a negative indicator. At the end of this article we will also compare BBSI to other stocks including MeiraGTx Holdings plc (NASDAQ:MGTX), First Defiance Financial (NASDAQ:FDEF), and Luther Burbank Corporation (NASDAQ:LBC) to get a better sense of its popularity.

At the end of the first quarter, a total of 13 of the hedge funds tracked by Insider Monkey were bullish on this stock, a change of 0% from the previous quarter. Below, you can check out the change in hedge fund sentiment towards BBSI over the last 15 quarters. With hedge funds’ capital changing hands, there exists a few notable hedge fund managers who were boosting their holdings substantially (or already accumulated large positions). 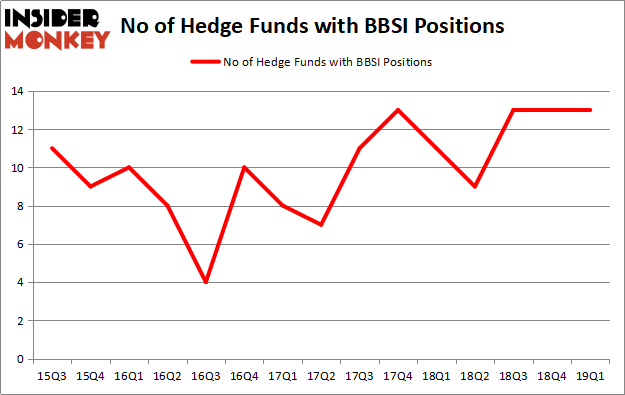 Among these funds, Renaissance Technologies held the most valuable stake in Barrett Business Services, Inc. (NASDAQ:BBSI), which was worth $33.3 million at the end of the first quarter. On the second spot was Cloverdale Capital Management which amassed $20.8 million worth of shares. Moreover, AQR Capital Management, GLG Partners, and Marshall Wace LLP were also bullish on Barrett Business Services, Inc. (NASDAQ:BBSI), allocating a large percentage of their portfolios to this stock.

We view hedge fund activity in the stock unfavorable, but in this case there was only a single hedge fund selling its entire position: Blue Mountain Capital. One hedge fund selling its entire position doesn’t always imply a bearish intent. Theoretically a hedge fund may decide to sell a promising position in order to invest the proceeds in a more promising idea. However, we don’t think this is the case in this case because only one of the 800+ hedge funds tracked by Insider Monkey identified as a viable investment and initiated a position in the stock (that fund was Winton Capital Management).

As you can see these stocks had an average of 10.5 hedge funds with bullish positions and the average amount invested in these stocks was $66 million. That figure was $87 million in BBSI’s case. SpartanNash Company (NASDAQ:SPTN) is the most popular stock in this table. On the other hand Luther Burbank Corporation (NASDAQ:LBC) is the least popular one with only 6 bullish hedge fund positions. Barrett Business Services, Inc. (NASDAQ:BBSI) is not the most popular stock in this group but hedge fund interest is still above average. Our calculations showed that top 20 most popular stocks among hedge funds returned 6.2% in Q2 through June 19th and outperformed the S&P 500 ETF (SPY) by nearly 3 percentage points. Hedge funds were also right about betting on BBSI as the stock returned 8.8% during the same period and outperformed the market by an even larger margin. Hedge funds were rewarded for their relative bullishness.