Hedge funds are not perfect. They have their bad picks just like everyone else. Facebook, a stock hedge funds have loved dearly, lost nearly 40% of its value at one point in 2018. Although hedge funds are not perfect, their consensus picks do deliver solid returns, however. Our data show the top 20 S&P 500 stocks among hedge funds beat the S&P 500 Index by more than 6 percentage points so far in 2019. Because hedge funds have a lot of resources and their consensus picks do well, we pay attention to what they think. In this article, we analyze what the elite funds think of Apollo Commercial Real Estate Finance, Inc. (NYSE:ARI).

Apollo Commercial Real Estate Finance, Inc. (NYSE:ARI) shareholders have witnessed an increase in enthusiasm from smart money recently. ARI was in 11 hedge funds’ portfolios at the end of March. There were 10 hedge funds in our database with ARI positions at the end of the previous quarter. Our calculations also showed that ari isn’t among the 30 most popular stocks among hedge funds.

According to most traders, hedge funds are perceived as worthless, outdated investment tools of the past. While there are more than 8000 funds trading at present, Our researchers hone in on the leaders of this group, around 750 funds. These investment experts watch over the lion’s share of the smart money’s total capital, and by observing their finest investments, Insider Monkey has spotted numerous investment strategies that have historically outperformed the market. Insider Monkey’s flagship hedge fund strategy outperformed the S&P 500 index by around 5 percentage points annually since its inception in May 2014 through June 18th. We were able to generate large returns even by identifying short candidates. Our portfolio of short stocks lost 28.2% since February 2017 (through June 18th) even though the market was up nearly 30% during the same period. We just shared a list of 5 short targets in our latest quarterly update and they are already down an average of 8.2% in a month whereas our long picks outperformed the market by 2.5 percentage points in this volatile 5 week period (our long picks also beat the market by 15 percentage points so far this year). 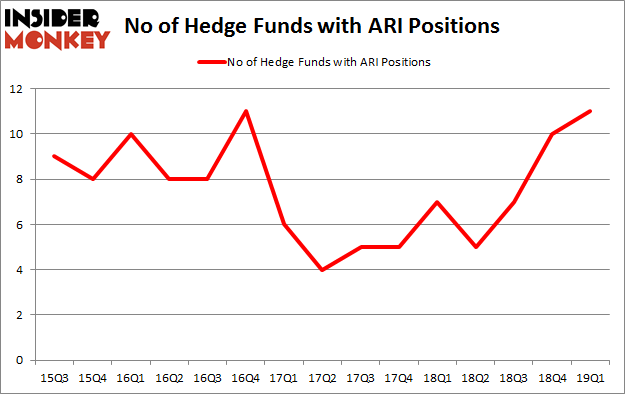 As you can see these stocks had an average of 20 hedge funds with bullish positions and the average amount invested in these stocks was $254 million. That figure was $27 million in ARI’s case. Rapid7 Inc (NASDAQ:RPD) is the most popular stock in this table. On the other hand Brady Corp (NYSE:BRC) is the least popular one with only 15 bullish hedge fund positions. Compared to these stocks Apollo Commercial Real Estate Finance, Inc. (NYSE:ARI) is even less popular than BRC. Hedge funds dodged a bullet by taking a bearish stance towards ARI. Our calculations showed that the top 20 most popular hedge fund stocks returned 6.2% in Q2 through June 19th and outperformed the S&P 500 ETF (SPY) by nearly 3 percentage points. Unfortunately ARI wasn’t nearly as popular as these 20 stocks (hedge fund sentiment was very bearish); ARI investors were disappointed as the stock returned 3.4% during the same time frame and underperformed the market. If you are interested in investing in large cap stocks with huge upside potential, you should check out the top 20 most popular stocks among hedge funds as 13 of these stocks already outperformed the market so far in the second quarter.