In this article we will check out the progression of hedge fund sentiment towards Aphria Inc. (NYSE:APHA) and determine whether it is a good investment right now. We at Insider Monkey like to examine what billionaires and hedge funds think of a company before spending days of research on it. Given their 2 and 20 payment structure, hedge funds have more incentives and resources than the average investor. The funds have access to expert networks and get tips from industry insiders. They also employ numerous Ivy League graduates and MBAs. Like everyone else, hedge funds perform miserably at times, but their consensus picks have historically outperformed the market after risk adjustments.

Hedge fund interest in Aphria Inc. (NYSE:APHA) shares was flat at the end of last quarter. This is usually a negative indicator. At the end of this article we will also compare APHA to other stocks including Veoneer, Inc. (NASDAQ:VNE), Independence Realty Trust Inc (NYSE:IRT), and EnPro Industries, Inc. (NYSE:NPO) to get a better sense of its popularity.

In today’s marketplace there are numerous indicators shareholders employ to assess publicly traded companies. A couple of the most useful indicators are hedge fund and insider trading indicators. We have shown that, historically, those who follow the best picks of the elite investment managers can outclass the S&P 500 by a significant amount (see the details here).

At Insider Monkey we leave no stone unturned when looking for the next great investment idea. For example, We take a look at lists like the 10 most profitable companies in the world to identify the compounders that are likely to deliver double digit returns. We interview hedge fund managers and ask them about their best ideas. We read hedge fund investor letters and listen to stock pitches at hedge fund conferences. For example we are checking out stocks recommended/scorned by legendary Bill Miller. Our best call in 2020 was shorting the market when the S&P 500 was trading at 3150 in February after realizing the coronavirus pandemic’s significance before most investors. With all of this in mind we’re going to analyze the recent hedge fund action surrounding Aphria Inc. (NYSE:APHA).

What does smart money think about Aphria Inc. (NYSE:APHA)? 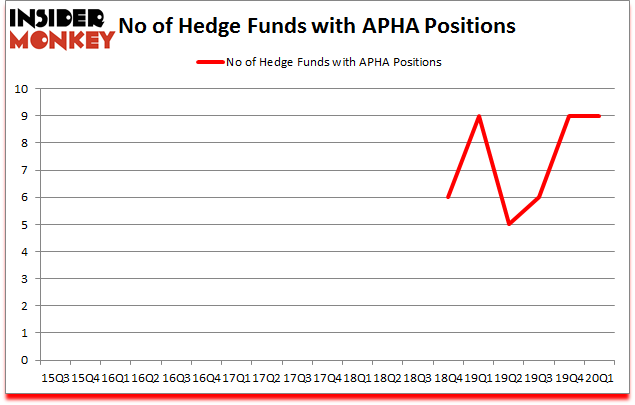 According to Insider Monkey’s hedge fund database, D E Shaw, managed by D. E. Shaw, holds the most valuable position in Aphria Inc. (NYSE:APHA). D E Shaw has a $1.8 million position in the stock, comprising less than 0.1%% of its 13F portfolio. On D E Shaw’s heels is Citadel Investment Group, led by Ken Griffin, holding a $1.6 million call position; the fund has less than 0.1%% of its 13F portfolio invested in the stock. Some other professional money managers that are bullish encompass  Renaissance Technologies, William Harnisch’s Peconic Partners LLC and Daniel S. Och’s OZ Management. In terms of the portfolio weights assigned to each position Peconic Partners LLC allocated the biggest weight to Aphria Inc. (NYSE:APHA), around 0.3% of its 13F portfolio. Granite Point Capital is also relatively very bullish on the stock, setting aside 0.17 percent of its 13F equity portfolio to APHA.

We view hedge fund activity in the stock unfavorable, but in this case there was only a single hedge fund selling its entire position: Citadel Investment Group. One hedge fund selling its entire position doesn’t always imply a bearish intent. Theoretically a hedge fund may decide to sell a promising position in order to invest the proceeds in a more promising idea. However, we don’t think this is the case in this case because only one of the 800+ hedge funds tracked by Insider Monkey identified as a viable investment and initiated a position in the stock (that fund was Granite Point Capital).

As you can see these stocks had an average of 11.5 hedge funds with bullish positions and the average amount invested in these stocks was $69 million. That figure was $5 million in APHA’s case. Independence Realty Trust Inc (NYSE:IRT) is the most popular stock in this table. On the other hand United Fire Group, Inc. (NASDAQ:UFCS) is the least popular one with only 5 bullish hedge fund positions. Aphria Inc. (NYSE:APHA) is not the least popular stock in this group but hedge fund interest is still below average. Our calculations showed that top 10 most popular stocks among hedge funds returned 41.4% in 2019 and outperformed the S&P 500 ETF (SPY) by 10.1 percentage points. These stocks gained 13.4% in 2020 through June 22nd and still beat the market by 15.9 percentage points. A small number of hedge funds were also right about betting on APHA as the stock returned 45.4% during the second quarter and outperformed the market by an even larger margin.