In these volatile markets we scrutinize hedge fund filings to get a reading on which direction each stock might be going. The latest 13F reporting period has come and gone, and Insider Monkey is again at the forefront when it comes to making use of this gold mine of data. We have processed the filings of the more than 835 world-class investment firms that we track and now have access to the collective wisdom contained in these filings, which are based on their December 31 holdings, data that is available nowhere else. Should you consider The Dow Chemical Company (NYSE:DOW) for your portfolio? We’ll look to this invaluable collective wisdom for the answer.

The Dow Chemical Company (NYSE:DOW) investors should pay attention to a decrease in enthusiasm from smart money recently. DOW was in 34 hedge funds’ portfolios at the end of December. There were 37 hedge funds in our database with DOW positions at the end of the previous quarter. Our calculations also showed that DOW isn’t among the 30 most popular stocks among hedge funds (click for Q4 rankings and see the video below for Q3 rankings).

In the 21st century investor’s toolkit there are tons of signals stock market investors put to use to assess publicly traded companies. A couple of the most useful signals are hedge fund and insider trading moves. Our researchers have shown that, historically, those who follow the top picks of the top investment managers can outperform the S&P 500 by a healthy margin (see the details here).

We leave no stone unturned when looking for the next great investment idea. For example Europe is set to become the world’s largest cannabis market, so we check out this European marijuana stock pitch. We read hedge fund investor letters and listen to stock pitches at hedge fund conferences, and and go through short-term trade recommendations like this one. We even check out the recommendations of services with hard to believe track records. In January, we recommended a long position in one of the most shorted stocks in the market, and that stock returned more than 50% despite the large losses in the market since our recommendation. Keeping this in mind we’re going to take a look at the new hedge fund action regarding The Dow Chemical Company (NYSE:DOW). 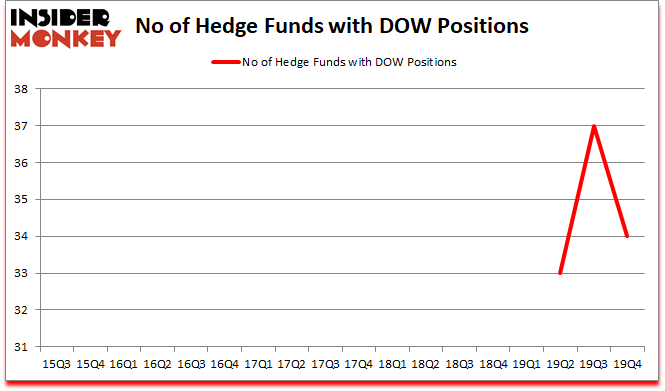 Seeing as The Dow Chemical Company (NYSE:DOW) has faced declining sentiment from the entirety of the hedge funds we track, logic holds that there lies a certain “tier” of money managers that elected to cut their entire stakes by the end of the third quarter. At the top of the heap, Clint Carlson’s Carlson Capital dropped the largest investment of the “upper crust” of funds monitored by Insider Monkey, worth close to $36.8 million in stock. Lee Ainslie’s fund, Maverick Capital, also dropped its stock, about $34.8 million worth. These transactions are intriguing to say the least, as total hedge fund interest was cut by 3 funds by the end of the third quarter.

As you can see these stocks had an average of 40.5 hedge funds with bullish positions and the average amount invested in these stocks was $1622 million. That figure was $165 million in DOW’s case. Autodesk, Inc. (NASDAQ:ADSK) is the most popular stock in this table. On the other hand Manulife Financial Corporation (NYSE:MFC) is the least popular one with only 19 bullish hedge fund positions. The Dow Chemical Company (NYSE:DOW) is not the least popular stock in this group but hedge fund interest is still below average. This is a slightly negative signal and we’d rather spend our time researching stocks that hedge funds are piling on. Our calculations showed that top 20 most popular stocks among hedge funds returned 41.3% in 2019 and outperformed the S&P 500 ETF (SPY) by 10.1 percentage points. These stocks lost 11.7% in 2020 through March 11th but beat the market by 3.1 percentage points. Unfortunately DOW wasn’t nearly as popular as these 20 stocks (hedge fund sentiment was quite bearish); DOW investors were disappointed as the stock returned -48% during the same time period and underperformed the market. If you are interested in investing in large cap stocks with huge upside potential, you should check out the top 20 most popular stocks among hedge funds as most of these stocks already outperformed the market in Q1.