Insider Monkey has processed numerous 13F filings of hedge funds and successful value investors to create an extensive database of hedge fund holdings. The 13F filings show the hedge funds’ and successful investors’ positions as of the end of the first quarter. You can find articles about an individual hedge fund’s trades on numerous financial news websites. However, in this article we will take a look at their collective moves over the last 4.5 years and analyze what the smart money thinks of Verint Systems Inc. (NASDAQ:VRNT) based on that data.

Verint Systems Inc. (NASDAQ:VRNT) investors should pay attention to an increase in hedge fund interest of late. VRNT was in 17 hedge funds’ portfolios at the end of March. There were 15 hedge funds in our database with VRNT holdings at the end of the previous quarter. Our calculations also showed that VRNT isn’t among the 30 most popular stocks among hedge funds (click for Q1 rankings and see the video for a quick look at the top 5 stocks). 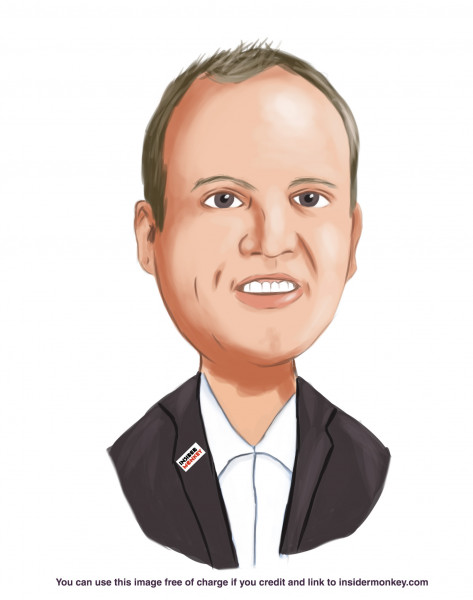 With all of this in mind we’re going to take a look at the new hedge fund action encompassing Verint Systems Inc. (NASDAQ:VRNT).

How have hedgies been trading Verint Systems Inc. (NASDAQ:VRNT)?

Heading into the second quarter of 2020, a total of 17 of the hedge funds tracked by Insider Monkey were long this stock, a change of 13% from the fourth quarter of 2019. Below, you can check out the change in hedge fund sentiment towards VRNT over the last 18 quarters. With hedge funds’ positions undergoing their usual ebb and flow, there exists a select group of key hedge fund managers who were boosting their holdings substantially (or already accumulated large positions). 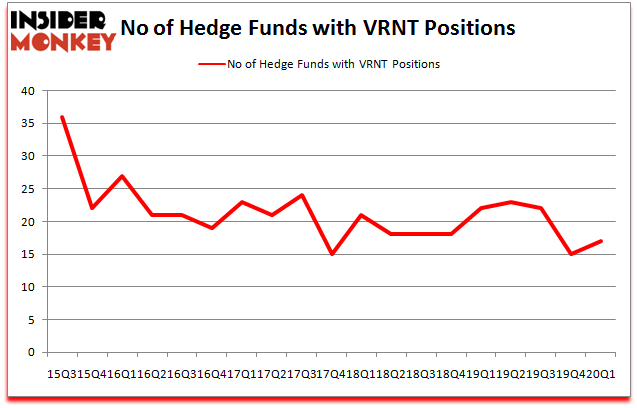 The largest stake in Verint Systems Inc. (NASDAQ:VRNT) was held by RGM Capital, which reported holding $76.7 million worth of stock at the end of September. It was followed by Fisher Asset Management with a $61.3 million position. Other investors bullish on the company included Cardinal Capital, Citadel Investment Group, and Winton Capital Management. In terms of the portfolio weights assigned to each position RGM Capital allocated the biggest weight to Verint Systems Inc. (NASDAQ:VRNT), around 6.02% of its 13F portfolio. Cardinal Capital is also relatively very bullish on the stock, earmarking 2.52 percent of its 13F equity portfolio to VRNT.

As one would reasonably expect, key hedge funds were breaking ground themselves. Citadel Investment Group, managed by Ken Griffin, created the most outsized position in Verint Systems Inc. (NASDAQ:VRNT). Citadel Investment Group had $2.4 million invested in the company at the end of the quarter. Lee Ainslie’s Maverick Capital also made a $1 million investment in the stock during the quarter. The other funds with brand new VRNT positions are Alec Litowitz and Ross Laser’s Magnetar Capital and Renee Yao’s Neo Ivy Capital.

Let’s now take a look at hedge fund activity in other stocks – not necessarily in the same industry as Verint Systems Inc. (NASDAQ:VRNT) but similarly valued. We will take a look at Janus Henderson Group plc (NYSE:JHG), nVent Electric plc (NYSE:NVT), Q2 Holdings Inc (NYSE:QTWO), and UniFirst Corp (NYSE:UNF). All of these stocks’ market caps are closest to VRNT’s market cap.

As you can see these stocks had an average of 21.75 hedge funds with bullish positions and the average amount invested in these stocks was $218 million. That figure was $206 million in VRNT’s case. nVent Electric plc (NYSE:NVT) is the most popular stock in this table. On the other hand UniFirst Corp (NYSE:UNF) is the least popular one with only 17 bullish hedge fund positions. Compared to these stocks Verint Systems Inc. (NASDAQ:VRNT) is even less popular than UNF. Hedge funds dodged a bullet by taking a bearish stance towards VRNT. Our calculations showed that the top 10 most popular hedge fund stocks returned 41.4% in 2019 and outperformed the S&P 500 ETF (SPY) by 10.1 percentage points. These stocks gained 13.4% in 2020 through June 22nd but managed to beat the market by 15.9 percentage points. Unfortunately VRNT wasn’t nearly as popular as these 10 stocks (hedge fund sentiment was very bearish); VRNT investors were disappointed as the stock returned 2.5% during the second quarter (through June 22nd) and underperformed the market. If you are interested in investing in large cap stocks with huge upside potential, you should check out the top 10 most popular stocks among hedge funds as most of these stocks already outperformed the market so far in 2020.