It isn’t easy being a short-seller in a bull market, and indeed, they’re becoming an increasingly rare commodity. Recently, we covered a damning report released by one of them, Spruce Point Management, a firm whose primary goal is to find companies it finds particularly pungent for the purposes of short-selling them and waiting for the debacle to unfold. Its target at the time was NCR Corporation (NYSE:NCR). In the 98-page report, Spruce Point suggested NCR should be considered a “Strong Sell” with 45%-70% downside risk. The report focused on the problems related to the company’s primary operations and management. Most importantly, it covered the challenges coming from the financial payments sector, where retailers are increasingly turning down point-of-sale technology and switching instead to mobile payments solutions like Square, Apple Pay, and Google Wallet in attempts to reduce costs. Adding to that, Spruce Point unequivocally hinted at potential accounting overstatements by NCR Corporation (NYSE:NCR)’s top executives, several of whom were formerly engaged with notorious company Symbol, known for its own accounting frauds back in the early 2000’s. 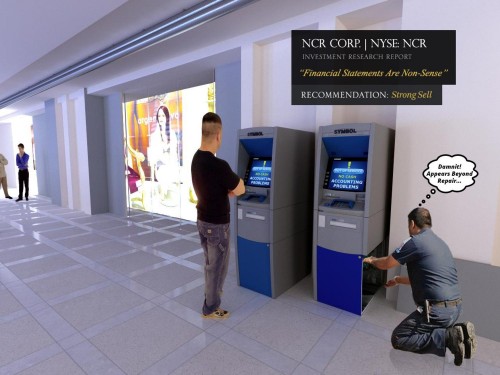 It certainly seemed like Spruce Point had a strong argument, and shares of NCR Corporation (NYSE:NCR) would drop by about 8% in the week following the release of the report, which included the release of underwhelming quarterly results for the company that appeared to fall neatly into Spruce Point’s thesis. Shares of the Georgia-based producer of ATMs, service and software for ATMs, point-of-sale devices and software, and other products and services began to rebound in May however and had made up their late April losses by the end of the month. However Spruce Point suffered a setback on June 12, when it was reported that a joint bid by two of the biggest private equity firms in the world, Blackstone Group LP and Carlyle Group LP, would seek to acquire all outstanding shares of  NCR Corporation (NYSE:NCR). Those shares shot up by nearly 15% as a result and left short-sellers like Spruce Point in a precarious position, as a sale of the company would appear on the surface to be a very real possibility at this point, which would end any chance of their short thesis playing out; a somewhat cruel fate perhaps, to essentially not even have a fair chance at seeing whether their exhaustively presented thesis would’ve proven correct or not and whether NCR would’ve crumbled.