Insider Monkey has processed numerous 13F filings of hedge funds and famous investors to create an extensive database of hedge fund holdings. The 13F filings show the hedge funds and investors’ positions as of the end of the third quarter. You can find write-ups about an individual hedge fund’s trades on numerous financial news websites. However, in this article we will take a look at their collective moves and analyze what the smart money thinks of Intelsat S.A. (NYSE:I) based on that data.

Intelsat S.A. (NYSE:I) has had an incredible year on the stock market, which hasn’t escaped the notice of hedge funds, which have increasingly been along for the ride. The number of hedge fund shareholders has nearly tripled over the past two quarters and includes Sahm Adrangi‘s Kerrisdale Capital, which was the top performing hedge fund tracked by our database in Q3 according to our returns methodology. Back in June, Kerrisdale Capital shared its comprehensive thesis on the immense untapped value lying dormant in shares of Intelsat S.A. (NYSE:I), estimating that this year’s gains thus far are just the tip of the iceberg, estimating that shares are worth $151, or more than 5X their current price despite the obscene returns already achieved this year.

“We are long shares of Intelsat and SES, two large satellite operators with significant and underappreciated 5G spectrum assets. For us, this is an unusual position to be in. For years, with our reports on Globalstar (2014), Straight Path (2015) and DISH (2016), we have publicly railed against the excesses of spectrum hype. Time and again, we have argued, equity investors have gotten carried away with their enthusiasm about offbeat frequencies and futuristic technologies, ignoring inconvenient details and weak business cases. But this time, it’s different. Intelsat and SES hold the keys to the right frequencies, in the right way, at the right time, without the irreconcilable interference issues that have beset other spectrum stories. The value they
stand to reap is staggering: ~$60 billion. Intelsat is worth $151 per share, and SES, €51,” the fund wrote.

What have hedge funds been doing with Intelsat S.A. (NYSE:I)? 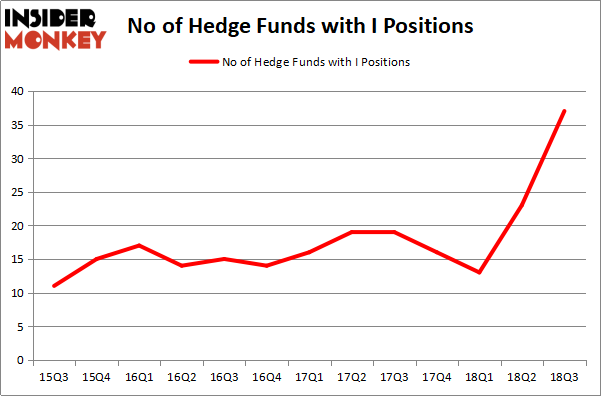 More specifically, Silver Lake Partners was the largest shareholder of Intelsat S.A. (NYSE:I), with a stake worth $425.1 million reported as of the end of September. Trailing Silver Lake Partners was Discovery Capital Management, which amassed a stake valued at $174 million. Soros Fund Management, Empyrean Capital Partners, and Renaissance Technologies were also very fond of the stock, giving the stock large weights in their portfolios.

As you can see these stocks had an average of 15 hedge funds with bullish positions and the average amount invested in these stocks was $204 million. That figure was $1.13 billion in Intelsat’s case. J2 Global Inc (NASDAQ:JCOM) is the most popular stock in this table. On the other hand MSA Safety Incorporated (NYSE:MSA) is the least popular one with only 10 bullish hedge fund positions. Compared to these stocks Intelsat S.A. (NYSE:I) is more popular among hedge funds. Considering that hedge funds are incredibly bullish on this stock, we recommend poring over Kerrisdale’s detailed analysis of it and potentially include Intelsat in your portfolio.