At the end of February we announced the arrival of the first US recession since 2009 and we predicted that the market will decline by at least 20% in (Recession is Imminent: We Need A Travel Ban NOW). In these volatile markets we scrutinize hedge fund filings to get a reading on which direction each stock might be going. In this article, we will take a closer look at hedge fund sentiment towards Banco Santander (Brasil) SA (NYSE:BSBR).

Hedge fund interest in Banco Santander (Brasil) SA (NYSE:BSBR) shares was flat at the end of last quarter. This is usually a negative indicator. At the end of this article we will also compare BSBR to other stocks including General Dynamics Corporation (NYSE:GD), Aon plc (NYSE:AON), and Dollar General Corp. (NYSE:DG) to get a better sense of its popularity.

At Insider Monkey we leave no stone unturned when looking for the next great investment idea. For example, We take a look at lists like the 10 most profitable companies in the world to identify the compounders that are likely to deliver double digit returns. We interview hedge fund managers and ask them about their best ideas. We read hedge fund investor letters and listen to stock pitches at hedge fund conferences. For example we are checking out stocks recommended/scorned by legendary Bill Miller. Our best call in 2020 was shorting the market when the S&P 500 was trading at 3150 in February after realizing the coronavirus pandemic’s significance before most investors. With all of this in mind we’re going to take a gander at the recent hedge fund action regarding Banco Santander (Brasil) SA (NYSE:BSBR). 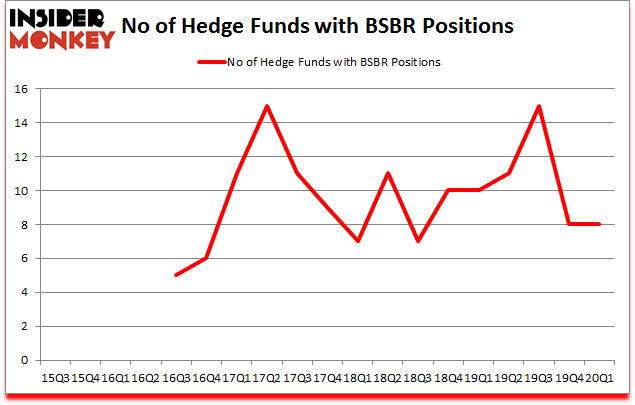 More specifically, Renaissance Technologies was the largest shareholder of Banco Santander (Brasil) SA (NYSE:BSBR), with a stake worth $10.7 million reported as of the end of September. Trailing Renaissance Technologies was Millennium Management, which amassed a stake valued at $3.8 million. Engineers Gate Manager, AQR Capital Management, and Schonfeld Strategic Advisors were also very fond of the stock, becoming one of the largest hedge fund holders of the company. In terms of the portfolio weights assigned to each position Engineers Gate Manager allocated the biggest weight to Banco Santander (Brasil) SA (NYSE:BSBR), around 0.04% of its 13F portfolio. Schonfeld Strategic Advisors is also relatively very bullish on the stock, setting aside 0.03 percent of its 13F equity portfolio to BSBR.

Judging by the fact that Banco Santander (Brasil) SA (NYSE:BSBR) has witnessed bearish sentiment from the entirety of the hedge funds we track, we can see that there were a few money managers who sold off their full holdings in the first quarter. Interestingly, Ken Heebner’s Capital Growth Management said goodbye to the largest stake of all the hedgies watched by Insider Monkey, comprising close to $37.4 million in stock, and Peter Rathjens, Bruce Clarke and John Campbell’s Arrowstreet Capital was right behind this move, as the fund cut about $8.8 million worth. These moves are important to note, as total hedge fund interest stayed the same (this is a bearish signal in our experience).

As you can see these stocks had an average of 43.75 hedge funds with bullish positions and the average amount invested in these stocks was $2912 million. That figure was $16 million in BSBR’s case. Dollar General Corp. (NYSE:DG) is the most popular stock in this table. On the other hand Ferrari N.V. (NYSE:RACE) is the least popular one with only 29 bullish hedge fund positions. Compared to these stocks Banco Santander (Brasil) SA (NYSE:BSBR) is even less popular than RACE. Hedge funds dodged a bullet by taking a bearish stance towards BSBR. Our calculations showed that the top 10 most popular hedge fund stocks returned 41.4% in 2019 and outperformed the S&P 500 ETF (SPY) by 10.1 percentage points. These stocks gained 12.2% in 2020 through June 17th but managed to beat the market by 14.8 percentage points. Unfortunately BSBR wasn’t nearly as popular as these 10 stocks (hedge fund sentiment was very bearish); BSBR investors were disappointed as the stock returned 15% during the second quarter (through June 17th) and underperformed the market. If you are interested in investing in large cap stocks with huge upside potential, you should check out the top 10 most popular stocks among hedge funds as most of these stocks already outperformed the market so far in 2020.