The first quarter was a breeze as Powell pivoted, and China seemed eager to reach a deal with Trump. Both the S&P 500 and Russell 2000 delivered very strong gains as a result, with the Russell 2000, which is composed of smaller companies, outperforming the large-cap stocks slightly during the first quarter. Unfortunately sentiment shifted in May and August as this time China pivoted and Trump put more pressure on China by increasing tariffs. Fourth quarter brought optimism to the markets and hedge funds’ top 20 stock picks performed spectacularly in this volatile environment. These stocks delivered a total gain of 34.7% through November 22nd, vs. a gain of 26.2% for the S&P 500 ETF. In this article we will look at how this market volatility affected the sentiment of hedge funds towards Inovio Pharmaceuticals Inc (NASDAQ:INO), and what that likely means for the prospects of the company and its stock.

Inovio Pharmaceuticals Inc (NASDAQ:INO) was in 3 hedge funds’ portfolios at the end of the third quarter of 2019. INO has experienced a decrease in support from the world’s most elite money managers lately. There were 5 hedge funds in our database with INO positions at the end of the previous quarter. Our calculations also showed that INO isn’t among the 30 most popular stocks among hedge funds.

Unlike the largest US hedge funds that are convinced Dow will soar past 40,000 or the world’s most bearish hedge fund that’s more convinced than ever that a crash is coming, our long-short investment strategy doesn’t rely on bull or bear markets to deliver double digit returns. We only rely on the best performing hedge funds‘ buy/sell signals. Let’s review the recent hedge fund action regarding Inovio Pharmaceuticals Inc (NASDAQ:INO).

What does smart money think about Inovio Pharmaceuticals Inc (NASDAQ:INO)?

Heading into the fourth quarter of 2019, a total of 3 of the hedge funds tracked by Insider Monkey were long this stock, a change of -40% from one quarter earlier. By comparison, 8 hedge funds held shares or bullish call options in INO a year ago. With hedgies’ sentiment swirling, there exists a few noteworthy hedge fund managers who were boosting their stakes considerably (or already accumulated large positions). 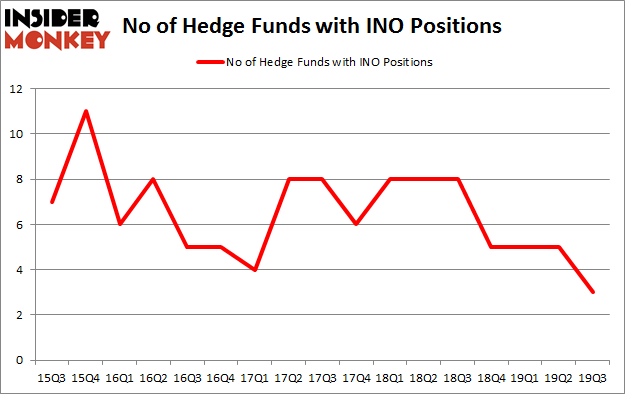 Of the funds tracked by Insider Monkey, David E. Shaw’s D E Shaw has the largest position in Inovio Pharmaceuticals Inc (NASDAQ:INO), worth close to $0.4 million, amounting to less than 0.1%% of its total 13F portfolio. On D E Shaw’s heels is Renaissance Technologies, which holds a $0.3 million position; less than 0.1%% of its 13F portfolio is allocated to the company. In terms of the portfolio weights assigned to each position D E Shaw allocated the biggest weight to Inovio Pharmaceuticals Inc (NASDAQ:INO), around 0.0005% of its portfolio. Renaissance Technologies is also relatively very bullish on the stock, earmarking 0.0002 percent of its 13F equity portfolio to INO.

Due to the fact that Inovio Pharmaceuticals Inc (NASDAQ:INO) has faced bearish sentiment from the aggregate hedge fund industry, it’s easy to see that there were a few money managers who were dropping their positions entirely heading into Q4. At the top of the heap, Ken Griffin’s Citadel Investment Group sold off the biggest position of the 750 funds tracked by Insider Monkey, worth about $0.1 million in call options, and Ken Griffin’s Citadel Investment Group was right behind this move, as the fund cut about $0.1 million worth. These moves are interesting, as aggregate hedge fund interest fell by 2 funds heading into Q4.

As you can see these stocks had an average of 5 hedge funds with bullish positions and the average amount invested in these stocks was $14 million. That figure was $1 million in INO’s case. Syndax Pharmaceuticals, Inc. (NASDAQ:SNDX) is the most popular stock in this table. On the other hand Chemung Financial Corporation (NASDAQ:CHMG) is the least popular one with only 3 bullish hedge fund positions. Compared to these stocks Inovio Pharmaceuticals Inc (NASDAQ:INO) is even less popular than CHMG. Hedge funds clearly dropped the ball on INO as the stock delivered strong returns, though hedge funds’ consensus picks still generated respectable returns. Our calculations showed that top 20 most popular stocks among hedge funds returned 34.7% in 2019 through November 22nd and outperformed the S&P 500 ETF (SPY) by 8.5 percentage points. A small number of hedge funds were also right about betting on INO as the stock returned 22% during the fourth quarter (through 11/22) and outperformed the market by an even larger margin.

Is Zosano Pharma Corp (ZSAN) A Good Stock To Buy?
Monthly Newsletter Strategy
Download a free copy of our newsletter and see the details inside!
Hedge Fund Resource Center
Related News
Check Out These 34 Stories To Find Out What’s Happening In The Financial Markets Today 40 Fresh Stories to Know How is it Going in the Financial Markets Today Inovio Pharmaceuticals Inc (INO) Stock: Spiking On Positive Study Results Inovio Pharmaceuticals Inc (INO) Looks Like a Nice Discount on the Oversell Tidewater, Inovio, Ariad, and More: What is Going on With These Falling Stocks? One Biotech Company Conducting the First Zika Vaccine Human Trial and Two Micro-Cap Companies Register Noteworthy Insider Buying Here’s Why These Five Stocks Are on the Move Today 10 Tinder Bio Examples For Serious Relationships Top 5 Best Smartphones With Removable Battery In 2019 10 Easiest Popular Songs to Play on Piano
Billionaire Hedge Funds