“October lived up to its scary reputation—the S&P 500 falling in the month by the largest amount in the last 40 years, the only worse Octobers being ’08 and the Crash of ’87. For perspective, there have been only 5 occasions in those 40 years when the S&P 500 declined by greater than 20% from peak to trough. Other than the ’87 Crash, all were during recessions. There were 17 other instances, over the same time frame, when the market fell by over 10% but less than 20%. Furthermore, this is the 18th correction of 5% or more since the current bull market started in March ’09. Corrections are the norm. They can be healthy as they often undo market complacency—overbought levels—potentially allowing the market to base and move even higher.” This is how Trapeze Asset Management summarized the recent market moves in its investor letter. We pay attention to what hedge funds are doing in a particular stock before considering a potential investment because it works for us. So let’s take a glance at the smart money sentiment towards one of the stocks hedge funds invest in, salesforce.com, inc. (NYSE:CRM).

salesforce.com, inc. (NYSE:CRM) has seen an increase in hedge fund ownership during each of the first 3 quarters of 2018, pushing to an all-time high of 86 hedge funds long the stock. That performance ranked it as one of the 30 Most Popular Stocks Among Hedge Funds in Q3 of 2018, though it just missed landing in the top-half of that list. While not one of the funds tracked by our database, RiverPark Large Growth Fund is also very bullish on CRM, writing in its Q1 investor letter:

“CRM has consistently grown revenue at greater than 20% each year since its founding in 1999 to more than $10 billion in sales last year. We believe that through price increases and new products to cross-sell to its large customer base, Salesforce can continue to drive greater than 20% annual revenue growth for the long-term. In fact, following a 48% increase in the company’s backlog in its most recent quarter, Marc Benioff, the company’s CEO, said he’d “never seen a demand environment like this,” as companies accelerate their investments around digital transformation initiatives, which plays squarely into Salesforce’s strengths.””

Heading into the fourth quarter of 2018, a total of 86 of the hedge funds tracked by Insider Monkey were bullish on this stock, a 5% rise from the second quarter of 2018. On the other hand, there were a total of 72 hedge funds with a bullish position in CRM at the beginning of this year. With the smart money’s capital changing hands, there exists a select group of noteworthy hedge fund managers who were boosting their holdings considerably (or already accumulated large positions). 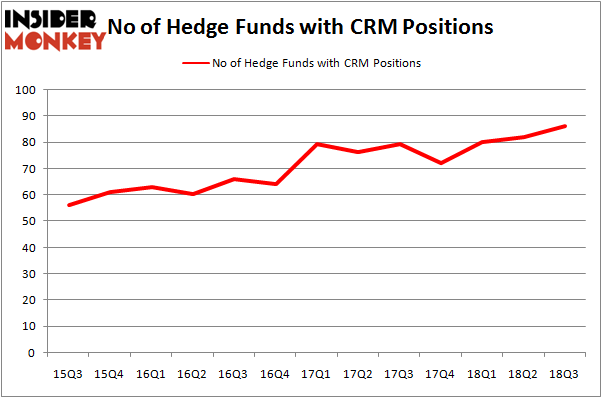 Of the funds tracked by Insider Monkey, Aaron Cowen’s Suvretta Capital Management has the number one position in salesforce.com, inc. (NYSE:CRM), worth close to $429 million, amounting to 9.9% of its total 13F portfolio. The second largest stake is held by Tiger Global Management LLC, managed by Chase Coleman, which holds a $375 million position; the fund has 1.8% of its 13F portfolio invested in the stock. Some other members of the smart money that are bullish include Peter Rathjens, Bruce Clarke and John Campbell’s Arrowstreet Capital, Ken Griffin’s Citadel Investment Group and Andreas Halvorsen’s Viking Global.

As you can see these stocks had an average of 29 hedge funds with bullish positions and the average amount invested in these stocks was $1.19 billion. That figure was $5.62 billion in CRM’s case. Altria Group Inc (NYSE:MO) is the most popular stock in this table. On the other hand BHP Group Plc (NYSE:BBL) is the least popular one with only 16 bullish hedge fund positions. Compared to these stocks salesforce.com, inc. (NYSE:CRM) is more popular among hedge funds. Considering that hedge funds are fond of this stock in relation to its market cap peers, it may be a good idea to analyze it in detail and potentially include it in your portfolio.

30 Most Popular Stocks Among Hedge Funds in Q3 of 2018Is CRM A Good Investment Right Now?is CRM a good stock to buyNYSE:CRMYahoo Finance