Coronavirus is probably the #1 concern in investors’ minds right now. It should be. We estimate that COVID-19 will kill around 5 million people worldwide and there is a 3.3% probability that Donald Trump will die from the new coronavirus (read the details.). In these volatile markets we scrutinize hedge fund filings to get a reading on which direction each stock might be going. The financial regulations require hedge funds and wealthy investors that exceeded the $100 million equity holdings threshold to file a report that shows their positions at the end of every quarter. Even though it isn’t the intention, these filings to a certain extent level the playing field for ordinary investors. The latest round of 13F filings disclosed the funds’ positions on December 31st. We at Insider Monkey have made an extensive database of more than 835 of those established hedge funds and famous value investors’ filings. In this article, we analyze how these elite funds and prominent investors traded Fidelity National Information Services Inc. (NYSE:FIS) based on those filings.

Is Fidelity National Information Services Inc. (NYSE:FIS) undervalued? The best stock pickers are in a bullish mood. The number of bullish hedge fund bets inched up by 10 recently. Our calculations also showed that FIS currently ranks 17th among the 30 most popular stocks among hedge funds (click for Q4 rankings and see the video below for Q3 rankings). FIS was in 105 hedge funds’ portfolios at the end of December. There were 95 hedge funds in our database with FIS positions at the end of the previous quarter.

We leave no stone unturned when looking for the next great investment idea. For example this gold mining company is acquiring gold mines in Americas at a fraction of the cost of drilling them, so we look into its viability. We read hedge fund investor letters and listen to stock pitches at hedge fund conferences, and and go through short-term trade recommendations like this one. We even check out the recommendations of services with hard to believe track records. In January, we recommended a long position in one of the most shorted stocks in the market, and that stock returned nearly 50% despite the large losses in the market since our recommendation. Now let’s take a look at the new hedge fund action regarding Fidelity National Information Services Inc. (NYSE:FIS). 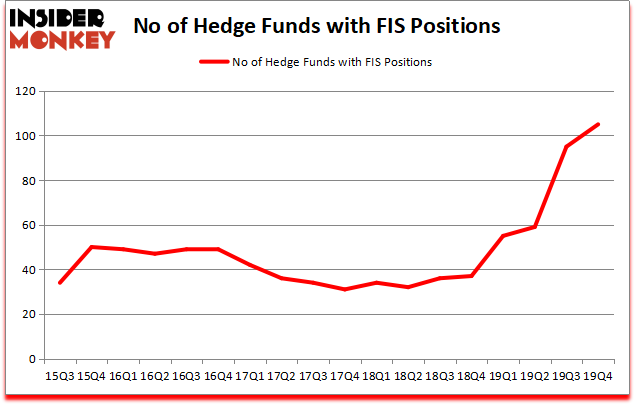 The largest stake in Fidelity National Information Services Inc. (NYSE:FIS) was held by Citadel Investment Group, which reported holding $704.8 million worth of stock at the end of September. It was followed by Cantillon Capital Management with a $565.1 million position. Other investors bullish on the company included Farallon Capital, Melvin Capital Management, and Steadfast Capital Management. In terms of the portfolio weights assigned to each position Caldera Capital allocated the biggest weight to Fidelity National Information Services Inc. (NYSE:FIS), around 19.98% of its 13F portfolio. BlueSpruce Investments is also relatively very bullish on the stock, earmarking 13.08 percent of its 13F equity portfolio to FIS.

As one would reasonably expect, specific money managers were breaking ground themselves. Alkeon Capital Management, managed by Panayotis Takis Sparaggis, initiated the biggest position in Fidelity National Information Services Inc. (NYSE:FIS). Alkeon Capital Management had $108.5 million invested in the company at the end of the quarter. Andreas Halvorsen’s Viking Global also made a $77.2 million investment in the stock during the quarter. The following funds were also among the new FIS investors: OZ Management, Mikal Patel’s Oribel Capital Management, and Michael Rockefeller and Karl Kroeker’s Woodline Partners.

As you can see these stocks had an average of 51.25 hedge funds with bullish positions and the average amount invested in these stocks was $2890 million. That figure was $8074 million in FIS’s case. Gilead Sciences, Inc. (NASDAQ:GILD) is the most popular stock in this table. On the other hand Sony Corporation (NYSE:SNE) is the least popular one with only 26 bullish hedge fund positions. Compared to these stocks Fidelity National Information Services Inc. (NYSE:FIS) is more popular among hedge funds. Our calculations showed that top 20 most popular stocks among hedge funds returned 41.3% in 2019 and outperformed the S&P 500 ETF (SPY) by 10.1 percentage points. These stocks also gained 0.1% in 2020 through March 2nd and beat the market by 4.1 percentage points. Hedge funds were also right about betting on FIS as the stock returned 6.8% so far in Q1 (through March 2nd) and outperformed the market by an even larger margin. Hedge funds were clearly right about piling into this stock relative to other stocks with similar market capitalizations.