How do we determine whether Ambev S.A. (NYSE:ABEV) makes for a good investment at the moment? We analyze the sentiment of a select group of the very best investors in the world, who spend immense amounts of time and resources studying companies. They may not always be right (no one is), but data shows that their consensus long positions have historically outperformed the market when we adjust for known risk factors.

Hedge funds have been rather cool to Ambev S.A. (NYSE:ABEV) dating back to 2016, when more than half the previous hedge fund shareholders of the stock sold it off during the final three quarters of the year. Fisher Investments was not one of them, as it has held the stock since the final quarter of 2013, with it ranking 10th on the list of 25 Dividend Stocks that Billionaire Ken Fisher is Bullish On. A stronger economic recovery in Brazil would help the brewer, which has also seen its growth slow due to intense competition.

In the 21st century investor’s toolkit there are dozens of signals stock traders put to use to grade publicly traded companies. Two of the most useful signals are hedge fund and insider trading moves. Our experts have shown that, historically, those who follow the best picks of the best investment managers can outclass the broader indices by a very impressive amount (see the details here).

At the end of the third quarter, a total of 14 of the hedge funds tracked by Insider Monkey were long this stock, a 22% drop from the second quarter of 2018. On the other hand, there were a total of 24 hedge funds with a bullish position in ABEV in early-2016. With hedgies’ capital changing hands, there exists an “upper tier” of noteworthy hedge fund managers who were adding to their holdings considerably (or already accumulated large positions). 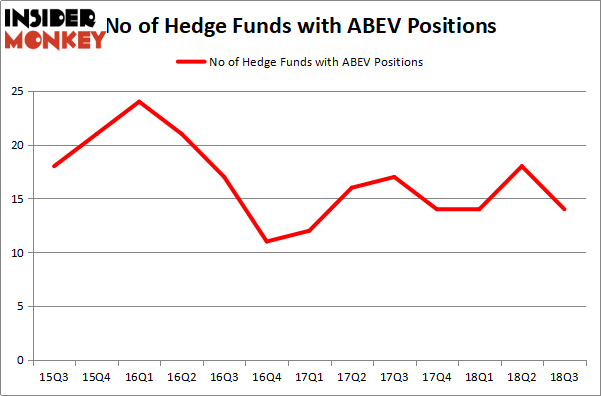 Since Ambev S.A. (NYSE:ABEV) has faced falling interest from the aggregate hedge fund industry, it’s easy to see that there was a specific group of funds that elected to cut their positions entirely heading into Q4. It’s worth mentioning that Ken Heebner’s Capital Growth Management cut the largest position of the “upper crust” of funds watched by Insider Monkey, totaling an estimated $28.5 million in stock, and Paul Marshall and Ian Wace’s Marshall Wace LLP was right behind this move, as the fund said goodbye to about $24.5 million worth. These bearish behaviors are intriguing to say the least, as aggregate hedge fund interest dropped by 4 funds heading into Q4.

As you can see these stocks had an average of 44 hedge funds with bullish positions and the average amount invested in these stocks was $2.91 billion. That figure was $250 million in ABEV’s case. Anthem, Inc. (NYSE:ANTM) is the most popular stock in this table. On the other hand Itaú Unibanco Holding S.A. (NYSE:ITUB) is the least popular one with only 15 bullish hedge fund positions. Compared to these stocks Ambev S.A. (NYSE:ABEV) is even less popular than ITUB. Considering that hedge funds aren’t fond of this stock in relation to other companies analyzed in this article, it may be a good idea to analyze it in detail and understand why the smart money isn’t behind this stock.

Is TripAdvisor, Inc. (NASDAQ:TRIP) A Good Stock To Buy?
Monthly Newsletter Strategy
Download a free copy of our newsletter and see the details inside!
Hedge Fund Resource Center
Related News
What’s Going On In The Finance World Today? 10 Best Selling Tequila Brands In The US Is Ambev SA (ADR) (ABEV) A Good Stock To Buy? Hedge Funds Still Like These Brazilian Stocks Five Alcohol Stocks Hedge Funds Like The Smart Money Is Fond of These Five Alcohol Stocks Five Beverage Stocks Hedge Funds Like 5 Ways You Can Eliminate Credit Card Debt 10 Easiest Road Test Sites in NY and NJ 10 Hottest Selling Products in the USA in 2018
Billionaire Hedge Funds