Hedge funds and other institutional investors have just completed filing their 13Fs with the Securities and Exchange Commission, revealing their equity portfolios as of the end of September. At Insider Monkey, we follow over 700 of the best-performing investors and by analyzing their 13F filings, we can determine the stocks that they are collectively bullish on. One of their picks is Comcast Corporation (NASDAQ:CMCSA), so let’s take a closer look at the sentiment that surrounds it in the current quarter.

The number of hedge funds long Comcast Corporation (NASDAQ:CMCSA) dipped slightly for the third-straight quarter, but the smart money otherwise remains extremely bullish on the cable and internet provider.92 funds were long Comcast on September 30, 13.3% of the funds tracked by Insider Monkey’s database. Comcast also ranked as one of the 30 Most Popular Stocks Among Hedge Funds, landing in the top half of that list.

Today there are numerous formulas shareholders employ to assess their holdings. Two of the most innovative formulas are hedge fund and insider trading sentiment. Our researchers have shown that, historically, those who follow the best picks of the elite fund managers can outperform the market by a solid margin (see the details here).

At the end of the third quarter, a total of 92 of the hedge funds tracked by Insider Monkey held long positions in this stock, a 1% dip from one quarter earlier. The graph below displays the number of hedge funds with bullish positions in CMCSA over the last 13 quarters. With hedgies’ sentiment swirling, there exists a few notable hedge fund managers who were adding to their holdings significantly (or already accumulated large positions). 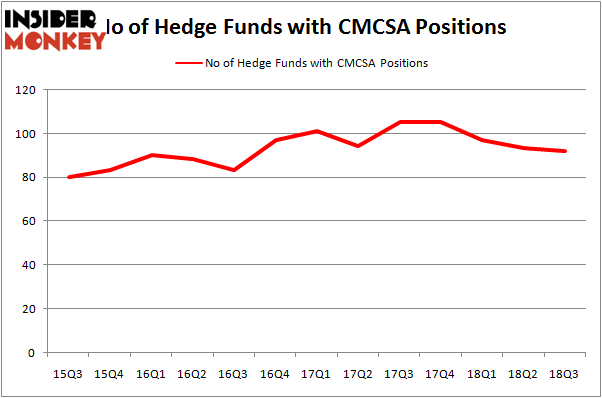 Among these funds, Eagle Capital Management held the most valuable stake in Comcast Corporation (NASDAQ:CMCSA), which was worth $1.11 billion at the end of the third quarter. On the second spot was Southeastern Asset Management which amassed $528.6 million worth of shares. Moreover, First Pacific Advisors LLC, Point72 Asset Management, and 3G Capital were also bullish on Comcast Corporation (NASDAQ:CMCSA), allocating a large percentage of their portfolios to this stock.

Because Comcast Corporation (NASDAQ:CMCSA) has experienced declining sentiment from hedge fund managers, logic holds that there exists a select few funds who were dropping their entire stakes heading into Q3. Intriguingly, Eric W. Mandelblatt and Gaurav Kapadia’s Soroban Capital Partners dropped the biggest position of all the hedgies monitored by Insider Monkey, totaling close to $328.1 million in call options, and Parag Vora’s HG Vora Capital Management was right behind this move, as the fund cut about $90.2 million worth. These transactions are important to note, as aggregate hedge fund interest fell by 1 fund heading into Q3.

As you can see these stocks had an average of 27 hedge funds with bullish positions and the average amount invested in these stocks was $2.03 billion. That figure was $6.57 billion in CMCSA’s case. PepsiCo, Inc. (NYSE:PEP) is the most popular stock in this table. On the other hand SAP SE (NYSE:SAP) is the least popular one with only 12 bullish hedge fund positions. Compared to these stocks Comcast Corporation (NASDAQ:CMCSA) is more popular among hedge funds. Considering that hedge funds are fond of this stock in relation to its market cap peers, it may be a good idea to analyze it in detail and potentially include it in your portfolio.