Hedge funds run by legendary names like Nelson Peltz and David Tepper make billions of dollars a year for themselves and their super-rich accredited investors (you’ve got to have a minimum of $1 million liquid to invest in a hedge fund) by spending enormous resources on analyzing and uncovering data about small-cap stocks that the big brokerage houses don’t follow. Small caps are where they can generate significant outperformance. That’s why we pay special attention to hedge fund activity in these stocks like Alamo Group, Inc. (NYSE:ALG).

Or lack of activity in Alamo Group’s case. The number of hedge funds that owned shares of Alamo Group, which ranks 9th on the list of Top 10 Largest Agricultural Equipment Companies in the World, remained unchanged during Q2. This is usually a negative indicator, as not many hedge funds seem to view Alamo Group shares as undervalued. We’ll see which hedge funds are bullish on the stock below.

In the financial world there are several formulas market participants have at their disposal to evaluate their holdings. A duo of the best formulas are hedge fund and insider trading indicators. We have shown that, historically, those who follow the top picks of the elite fund managers can outperform the market by a very impressive amount (see the details here).

At the end of the third quarter, a total of 13 of the hedge funds tracked by Insider Monkey held long positions in this stock, unchanged from the second quarter of 2018. By comparison, 12 hedge funds held shares or bullish call options in ALG heading into this year. With the smart money’s sentiment swirling, there exists an “upper tier” of noteworthy hedge fund managers who were boosting their holdings considerably (or already accumulated large positions). 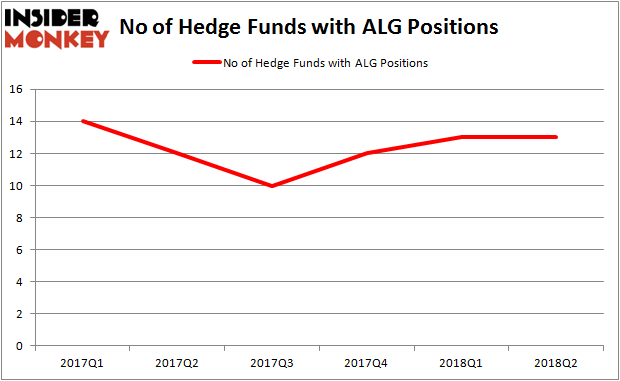 When looking at the institutional investors followed by Insider Monkey, James A. Star’s Longview Asset Management has the largest position in Alamo Group, Inc. (NYSE:ALG), worth close to $153.6 million, comprising 2.5% of its total 13F portfolio. The second-largest stake is held by Chuck Royce of Royce & Associates, with a $9.1 million position; the fund has 0.1% of its 13F portfolio invested in the stock. Other members of the smart money that hold long positions encompass Joseph A. Jolson’s Harvest Capital Strategies, Phil Frohlich’s Prescott Group Capital Management and Martin Whitman’s Third Avenue Management.

Due to the fact that Alamo Group, Inc. (NYSE:ALG) has witnessed falling interest from the smart money, it’s safe to say that there were a few hedgies who sold off their full holdings last quarter. It’s worth mentioning that Mike Vranos’ Ellington dumped the biggest stake of all the hedgies monitored by Insider Monkey, totaling close to $0.4 million in stock, and Gavin Saitowitz and Cisco J. del Valle’s Springbok Capital also sold off its position. These bearish behaviors are important to note, as aggregate hedge fund interest stayed the same (this is a bearish signal in our experience).

As you can see these stocks had an average of 13 hedge funds with bullish positions and the average amount invested in these stocks was $171 million. That figure was $190 million in ALG’s case. Chico’s FAS, Inc. (NYSE:CHS) is the most popular stock in this table. On the other hand Hannon Armstrong Sustnbl Infrstr Cap Inc (NYSE:HASI) is the least popular one with only 6 bullish hedge fund positions. Alamo Group, Inc. (NYSE:ALG) is not the least popular stock in this group but hedge fund interest is still below average and not going anywhere. This is a slightly negative signal and we’d rather spend our time researching stocks that hedge funds are piling on. In this regard CHS might be a better candidate to consider a long position in.