With the first-quarter round of 13F filings behind us it is time to take a look at the stocks in which some of the best money managers in the world preferred to invest or sell heading into the second quarter. One of these stocks was Twenty-First Century Fox Inc (NASDAQ:FOXA).

Is Twenty-First Century Fox Inc (NASDAQ:FOXA) a buy right now? Hedge funds are getting less bullish. The number of long hedge fund positions were cut by 12 in recent months. Our calculations also showed that FOXA isn’t among the 30 most popular stocks among hedge funds.

If you’d ask most traders, hedge funds are assumed to be worthless, old financial tools of the past. While there are more than 8000 funds in operation today, Our researchers choose to focus on the bigwigs of this club, approximately 750 funds. Most estimates calculate that this group of people oversee most of the smart money’s total capital, and by paying attention to their inimitable picks, Insider Monkey has figured out many investment strategies that have historically beaten the S&P 500 index. Insider Monkey’s flagship short hedge fund strategy exceeded the S&P 500 short ETFs by around 20 percentage points per year since its inception in May 2014. Our portfolio of short stocks lost 27.8% since February 2017 (through November 21st) even though the market was up more than 39% during the same period. We just shared a list of 7 short targets in our latest quarterly update .

Unlike the largest US hedge funds that are convinced Dow will soar past 40,000 or the world’s most bearish hedge fund that’s more convinced than ever that a crash is coming, our long-short investment strategy doesn’t rely on bull or bear markets to deliver double digit returns. We only rely on the best performing hedge funds‘ buy/sell signals. We’re going to review the latest hedge fund action encompassing Twenty-First Century Fox Inc (NASDAQ:FOXA).

How have hedgies been trading Twenty-First Century Fox Inc (NASDAQ:FOXA)? 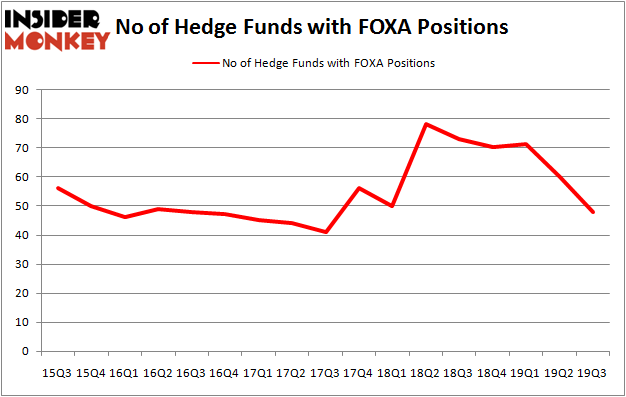 The largest stake in Twenty-First Century Fox Inc (NASDAQ:FOXA) was held by Baupost Group, which reported holding $861.6 million worth of stock at the end of September. It was followed by Renaissance Technologies with a $272.7 million position. Other investors bullish on the company included Third Point, 3G Capital, and Elliott Management. In terms of the portfolio weights assigned to each position 3G Capital allocated the biggest weight to Twenty-First Century Fox Inc (NASDAQ:FOXA), around 21.69% of its portfolio. MFN Partners is also relatively very bullish on the stock, setting aside 11.17 percent of its 13F equity portfolio to FOXA.

Seeing as Twenty-First Century Fox Inc (NASDAQ:FOXA) has faced a decline in interest from the smart money, logic holds that there exists a select few money managers who sold off their full holdings in the third quarter. At the top of the heap, John Armitage’s Egerton Capital Limited dropped the biggest position of the “upper crust” of funds watched by Insider Monkey, comprising close to $207.8 million in stock, and Herb Wagner’s FinePoint Capital was right behind this move, as the fund cut about $91.4 million worth. These transactions are important to note, as total hedge fund interest dropped by 12 funds in the third quarter.

As you can see these stocks had an average of 30 hedge funds with bullish positions and the average amount invested in these stocks was $900 million. That figure was $2458 million in FOXA’s case. D.R. Horton, Inc. (NYSE:DHI) is the most popular stock in this table. On the other hand ResMed Inc. (NYSE:RMD) is the least popular one with only 20 bullish hedge fund positions. Twenty-First Century Fox Inc (NASDAQ:FOXA) is not the most popular stock in this group but hedge fund interest is still above average. Our calculations showed that top 20 most popular stocks among hedge funds returned 34.7% in 2019 through November 22nd and outperformed the S&P 500 ETF (SPY) by 8.5 percentage points. Hedge funds were also right about betting on FOXA as the stock returned 13.1% during the fourth quarter (through 11/22) and outperformed the market. Hedge funds were rewarded for their relative bullishness.