“Value has performed relatively poorly since the 2017 shift, but we believe challenges to the S&P 500’s dominance are mounting and resulting active opportunities away from the index are growing. At some point, this fault line will break, likely on the back of rising rates, and all investors will be reminded that the best time to diversify away from the winners is when it is most painful. The bargain of capturing long-term value may be short-term pain, but enough is eventually enough and it comes time to harvest the benefits.,” said Clearbridge Investments in its market commentary. We aren’t sure whether long-term interest rates will top 5% and value stocks outperform growth, but we follow hedge fund investor letters to understand where the markets and stocks might be going. That’s why we believe it would be worthwhile to take a look at the hedge fund sentiment on Sohu.com Inc (NASDAQ:SOHU) in order to identify whether reputable and successful top money managers continue to believe in its potential.

Sohu.com Inc was in 11 hedge funds’ portfolios at the end of September. SOHU has seen a decrease in activity from the world’s largest hedge funds of late. There were 13 hedge funds in our database with SOHU holdings at the end of the previous quarter. Our calculations also showed that SOHU isn’t among the 30 most popular stocks among hedge funds.

While collecting information for our write-up, we came across Tao Value’s Quarterly Letter, which had an opinion on the stock. The hedge said the stock was a negative contributor to its portfolio at that time. We bring you a snippet from that report:

“SOHU suffered another sliding quarter, partially because of this quarter’s tech selloff, it appears even cheaper to its intrinsic value. CEO and Chairman Charles Zhang continued his capital market maneuvers to realize value. On February 1st, 2018, Zhang issued a letter to reiterate his commitment of the non-binding buyout offer however hinted a lowered offer price. On April 2nd, 2018, Sohu announced its plan to liquidate its Delaware entity shares and swap it with its Cayman entity shares, which could be driven by tax consideration.”

Our readers will be interested to know that Charles Zhang, CEO of the Chinese Internet company, was responsible for the last major insider purchase of the company’s common stock, snapping up 20,000 shares at $37.11 apiece in May 2018. The shares trade for $21.99 as of this writing, so the purchase was not a profitable one. We keep a track of any/all insider purchases that take place and if you want to check out some of the major moves you can check out this link: Hedge Fund and Insider Trading News: Carl Icahn, Elliott Management, Avon Products Inc (AVP), Crimson Wine Group Ltd (CWGL), Netflix, Inc. (NFLX), and More.

What does the smart money think about Sohu.com Inc (NASDAQ:SOHU)? 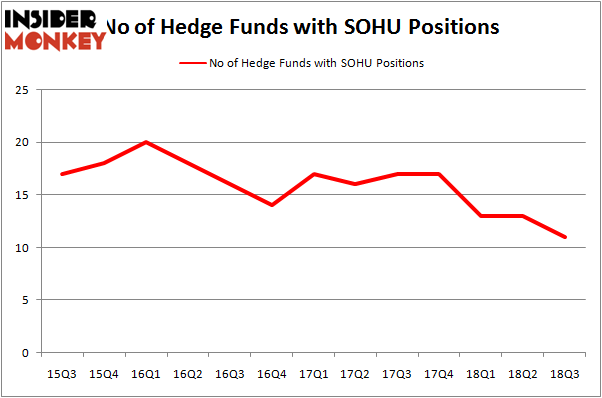 According to publicly available hedge fund and institutional investor holdings data compiled by Insider Monkey, Orbis Investment Management, managed by William B. Gray, holds the number one position in Sohu.com Inc (NASDAQ:SOHU). Orbis Investment Management has a $63.7 million position in the stock, comprising 0.4% of its 13F portfolio. The second largest stake is held by Renaissance Technologies, managed by Jim Simons, which holds a $37.7 million position; the fund has less than 0.1%% of its 13F portfolio invested in the stock. Other professional money managers that hold long positions encompass Lei Zhang’s Hillhouse Capital Management, Larry Chen and Terry Zhang’s Tairen Capital and John Overdeck and David Siegel’s Two Sigma Advisors.

Because Sohu.com Inc (NASDAQ:SOHU) has experienced falling interest from the aggregate hedge fund industry, we can see that there was a specific group of hedge funds that slashed their entire stakes heading into Q3. It’s worth mentioning that Kerr Neilson’s Platinum Asset Management said goodbye to the biggest stake of the “upper crust” of funds watched by Insider Monkey, comprising about $31.2 million in stock. David Costen Haley’s fund, HBK Investments, also sold off its stock, about $3.9 million worth. These transactions are important to note, as aggregate hedge fund interest fell by 2 funds heading into Q3.