hareThe 700+ hedge funds and money managers tracked by Insider Monkey have already compiled and submitted their 13F filings for the second quarter, which unveil their equity positions as of September 30. We went through these filings, fixed typos, and other more significant errors and identified the changes in hedge fund positions. Our extensive review of these public filings is finally over, so this article is set to reveal the smart money sentiment towards Skyworks Solutions Inc (NASDAQ:SWKS).

Skyworks Solutions Inc (NASDAQ:SWKS) was in 25 hedge funds’ portfolios at the end of the third quarter of 2018. SWKS shareholders have witnessed a decrease in hedge fund sentiment of late. There were 27 hedge funds in our database with SWKS holdings at the end of the previous quarter. Our calculations also showed that SWKS isn’t among the 30 most popular stocks among hedge funds.

To most shareholders, hedge funds are seen as underperforming, outdated financial tools of the past. While there are more than 8,000 funds with their doors open at the moment, Our researchers look at the aristocrats of this group, about 700 funds. Most estimates calculate that this group of people command most of the smart money’s total asset base, and by tracking their matchless equity investments, Insider Monkey has discovered many investment strategies that have historically outpaced Mr. Market. Insider Monkey’s flagship hedge fund strategy outperformed the S&P 500 index by 6 percentage points per annum since its inception in May 2014 through early November 2018. We were able to generate large returns even by identifying short candidates. Our portfolio of short stocks lost 24% since February 2017 (through December 3rd) even though the market was up nearly 23% during the same period. We just shared a list of 11 short targets in our latest quarterly update.

Income in the final quarter hit a record $1 billion, bringing non-GAAP profit per share to $1.94. Non-GAAP gross margin extended 30 points focuses on a consecutive premise and came in at 51.2% for the quarter. Monetary 2018 income rose 6% to $3.9 billion, as Skyworks keeps on taking a chance at 5G remote advances.

What have hedge funds been doing with Skyworks Solutions Inc (NASDAQ:SWKS)? 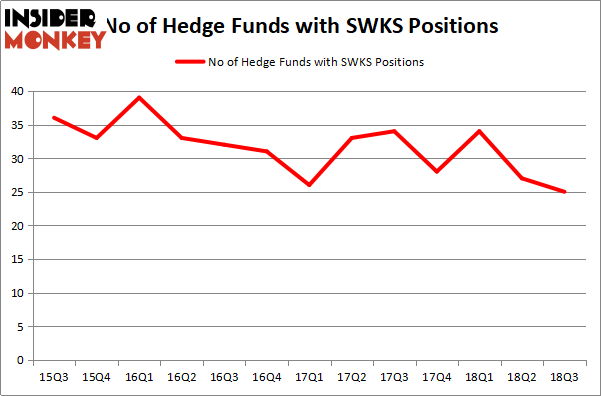 Of the funds tracked by Insider Monkey, AQR Capital Management, managed by Cliff Asness, holds the biggest position in Skyworks Solutions Inc (NASDAQ:SWKS). AQR Capital Management has a $698.3 million position in the stock, comprising 0.7% of its 13F portfolio. Sitting at the No. 2 spot is Anand Parekh of Alyeska Investment Group, with a $103.2 million position; the fund has 1.2% of its 13F portfolio invested in the stock. Other members of the smart money that hold long positions comprise Kerr Neilson’s Platinum Asset Management, and Ken Griffin’s Citadel Investment Group.

Because Skyworks Solutions Inc (NASDAQ:SWKS) has faced declining sentiment from the entirety of the hedge funds we track, logic holds that there lies a certain “tier” of money managers that elected to cut their positions entirely last quarter. At the top of the heap, Joel Greenblatt’s Gotham Asset Management sold off the largest investment of all the hedgies watched by Insider Monkey, totaling close to $17.2 million in stock. Paul Marshall and Ian Wace’s fund, Marshall Wace LLP, also sold off its stock, about $12.2 million worth. These bearish behaviors are interesting, as aggregate hedge fund interest was cut by 2 funds last quarter.

As you can see these stocks had an average of 19.75 hedge funds with bullish positions and the average amount invested in these stocks was $485 million. That figure was $1.04 billion in SWKS’s case. Franklin Resources, Inc. (NYSE:BEN) is the most popular stock in this table. On the other hand Smith & Nephew plc (NYSE:SNN) is the least popular one with only 9 bullish hedge fund positions. Skyworks Solutions Inc (NASDAQ:SWKS) is not the most popular stock in this group but hedge fund interest is still above average. This is a slightly positive signal but we’d rather spend our time researching stocks that hedge funds are piling on. In this regard BEN might be a better candidate to consider a long position.